Reflecting on Extremism and Insurrection on January 6 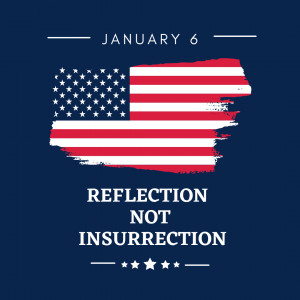 Two years ago, people across the world saw a mob incited by extremists attack the U.S. Capitol and attempt to violently overthrow free and fair elections. This violent insurrection was a painful and alarming reminder of the fragility of democracy and the dangers of unchecked extremism.

MHRN has been following extremist groups and leaders for more than 30 years. We held our breath alongside everyone else as we watched the January 6 insurrection play out, but we were not surprised. This attack was a culmination of decades of organizing and practicing threatening tactics with the purpose of intimidating the rest of us from using our Constitutional rights.

Extremism in action
Stewart Rhodes, who has been convicted of seditious conspiracy for his actions on January 6, lived in Montana while he built the Oath Keepers militia and recruited followers. We knew he was trouble back in 2009 when he first popped up on the militia scene. Ever since he formed Oath Keepers, we’ve answered questions about the dangers posed by the group and explained how it was a current iteration of the militia groups we saw in the 1990s, which spawned terrorists like the Oklahoma City bomber. Unfortunately, Rhodes and Oath Keepers proved our concerns were correct.

Just before the insurrection, we watched violent extremist Ammon Bundy leverage the fear and confusion of the COVID-19 pandemic to launch his anti-government group misleadingly named People’s Rights. We warned about Bundy’s dangerous behavior as he encouraged People’s Rights leaders in each state to disrupt health board and school board meetings or even protest outside officials’ homes. Months before the January 6 insurrection in 2021, Bundy organized supporters — some of them armed — to push past police and occupy the Idaho Capitol. Here in Montana, People’s Rights supporters made threatening statements about law enforcement officers in the Flathead Valley and stood outside the home of a local health official in Bozeman for days, disrupting the neighborhood and terrifying local children.

While Rhodes’ conviction puts the Oath Keepers in disarray, it’s important to remember that many rank-and-file followers won’t put aside the dangerous “political education” they received from the militia group. Instead, they will take many of those ideas with them as they find their next cause to manipulate and champion. Also, People’s Rights and other extremist groups continue their campaigns of misinformation and intimidation in Montana communities. Threats to our democracy still exist, and MHRN is here to help communities understand those threats, respond, and pull folks together to create resiliency against similar attacks in the future.

What communities can do

We’re not helpless in the face of attempts to destroy democracy using intimidation and violence. MHRN was founded more than 30 years ago to help communities keep safe and create positive responses to extremist activity. Last year, we worked with the Bard Center for the Study of Hate and Western States Center to create a community guide to help people respond to extremist activity and protect local officials and residents. It covers the basics of organizing a group and handling media requests, as well as building relationships with local officials. The guide offers many real-life scenarios and solutions.

If you see or hear of trouble in your community, please reach out to MHRN immediately. We are here to help Montanans reject extremism and create positive ways to bring people together to celebrate shared community values, like kindness, compassion, equality, and justice.

File a report using our online hate incident form or email us at research@mhrn.org if you see extremist activity in your community. You’re not alone, and we’re ready to help find support and solutions that reduce discrimination throughout Montana.