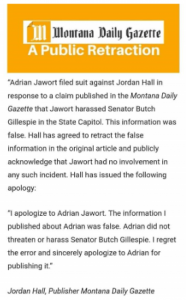 The Montana Human Rights Network extends our congratulations to Adrian Jawort and Upper Seven Law for winning their lawsuit against Sidney pastor Jordan Hall, who published false accusations against Jawort during the 2021 Montana Legislative Session.

Hall published dangerous, false statements in his extremist blog, the Montana Daily Gazette, and then went on a speaking tour across Montana to repeat those claims and beg for donations to his blog and his legal fees. Jawort received harassment and threats after Hall’s anti-LGBTQ+ campaign, and some of that continues today. In addition to the false statements, Hall has repeatedly and intentionally misgendered Ms. Jawort. We applaud Adrian’s strength and resilience through this challenging process.

MHRN has been following this case and Hall’s malicious statements for months. We are relieved that he is being held accountable for his untrue, unsubstantiated statements that have caused harm to Jawort and other members of the LGBTQ+ community. We commend Jawort for her courage and hope that others will speak out against malicious rumors that harm Montanans who already face discrimination.

Jawort is the Political Director of Indigenous Transilience.