Every corner of the 406 is feeling the pressure of rising housing costs and property taxes. Instead of making housing more affordable for hardworking people, partisan operatives created a tax giveaway called CI-121 to benefit themselves and their million-dollar property owning friends.

CI-121 is a ballot initiative that unfairly penalizes first-time homebuyers, seniors trying to downsize, and ranchers, without making housing more affordable for the average Montanan. It will also slash funding for schools, libraries, and other crucial services, damaging the high quality of life Montana is known for. CI-121 would radically alter the Montana Constitution, making it harder to change the Montana tax code in response to Montana residents’ needs. If CI-121 makes it into the Constitution, it would be almost impossible to remove it, which would saddle generations of Montanans with a harmful one-size-fits-all tax policy.

How Will This Impact the LGBTQ+ Community?

People who endure discrimination often suffer the most from bad legislation, and CI-121 is no exception. This proposal redirects the responsibility of property taxes from those who can most afford it, like those who own an expensive home or multiple homes, and shifts it to those who are struggling to make ends meet, like first-time homebuyers.

Several reports, including a 2020 report from the Williams Institute at the UCLA School of Law, found that members of the LGBTQ+ community are far more likely to face housing insecurity and discrimination when renting or getting a mortgage. CI-121 does nothing to bring down costs for renters or first-time home buyers. Possibly even more harmful is that CI-121 will force widespread cuts to critical public services that many LGBTQ+ folks rely on.

The fallout from CI-121 will extend far beyond home ownership. Many government services that people depend on, like public schools, libraries, roads and public transportation, will be starved of funds due to the property tax cap. 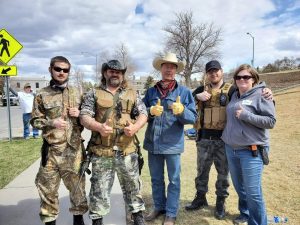 Al Olszewski, a primary supporter of CI-121, is pictured here with members of the Yellowstone Militia at a rally against health-prevention measures during the pandemic.

The primary supporters of CI-121 are well known to the Montana Human Rights Network. Matthew Monforton and Al Olszewski both have horrible records on human rights and are known for advancing extremist ideologies that endanger access to healthcare, reproductive rights, Indigenous sovereignty, and essential LGTBQ+ protections. Of late, Monforton has been hard at work trying to roll back the Clean Campaign Act and defending Pastor Jordan Hall for his reprehensible attacks on a transgender activist. When Monforton ran for public office, he was an outspoken proponent of policies that would have allowed businesses to deny services to LGBTQ+ folks.

Meanwhile, Al Olszewski is running for Congress peddling harmful policies like “building the wall,” restricting access to the ballot by requiring voter ID, and gutting government services. He has posed for pictures with militia members, publicly opposed the Flathead Water Compact, and has the endorsement of Jordan Hall’s extremist blog, the Montana Daily Gazette. He has always opposed reproductive rights and sponsored a referendum (since overturned) that made it harder for Indigenous people to vote.

What Can You Do?

The good news is that we have more than one chance to stop this policy from becoming a reality. Montana law requires 60,359 signatures by June 17th in order to qualify for the November ballot. To help us prevent a nasty fight this November, keep an eye out for CI-121 signature collectors. If you are asked to sign, please decline! Keeping this dangerous initiative off the ballot is the best way to defeat it! Most importantly, help us keep track of who and where folks are collecting signatures.

If you encounter a signature collector, use it as an opportunity to help us organize against CI-121. Note how they are asking for signatures. Ask them how long they have been collecting signatures, and how they got involved in the issue. Take a moment to review their petition, making a note of how many signatures are on the sheet. Thank them for their time and return the petition to them without signing it. Tell them you need more time to research the issue. While the information is fresh, please report everything you have learned by email to MTPetitionReporting@gmail.com or by text to (406) 201-9657. When reporting signature collection activity, please include the date, time, and location—these items are essential to track and record the activity.

Please share the dangers of CI-121 with your friends and family, so that they also know what to do if they are asked to sign a petition to move CI-121 onto the ballot. You can also sign the pledge to oppose CI-121 here: https://knowtheconsequences121.com/sign-the-pledge/

CI-121 was designed to deepen economic disparities and rig Montana’s tax code so people who have the most financial resources don’t have to pay what they owe to keep local services running. Please help protect access to a high quality of life for all Montanans by opposing CI-121.