The research team at the Montana Human Rights Network actively monitors the plans and actions of White Lives Matter (WLM) supporters. When actionable information is uncovered, we coordinate with law enforcement and alert leaders and folks in the Jewish, BIPOC, and LGBTQ+ communities to ensure that affected communities are aware of their activities. We had very reliable information ahead of the WLM protest in Helena over the weekend, but we decided not to issue a public statement, as we didn’t want to inadvertently provide them with free advertising. We know how violent extremists try to manipulate media coverage to their advantage. Now that their “Day of Action” is over, we are eager to provide accurate information and context regarding WLM, their dangerous ideology, and presence throughout Montana.

On Saturday, December 18, a small group of about 10 white nationalists held signs and banners at an intersection near Costco in Helena. These Montana members of the national neo-Nazi group called White Lives Matter were participating in the national group’s “Day of Action.” Formed by established white nationalists, WLM is designated a hate group by the Southern Poverty Law Center. While the Montana chapter has only 15-20 activists, its activity has increased recently, and WLM supporters encourage like-minded extremists to move to Montana.

Until recently, WLM’s biggest presence had been in the Flathead Valley. WLM supporters in this area have placed racist stickers in public spaces throughout Kalispell including Depot Park, Main Street, and the ImagineIF Libraries. However, after the national group announced its day of action, WLM stickers and extremists started showing up in other communities. Racist stickers have been spotted in Bozeman, Great Falls, Helena, Missoula, and Polson. WLM supporters also held racist honk-and-wave events at busy intersections in Helena and Missoula. From this activity, it’s clear the WLM chapter in Montana was trying to attract attention and new recruits for their event in Helena on December 18. 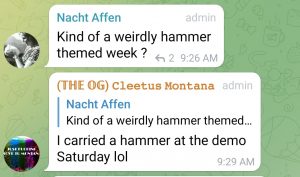 In the week leading up to December 18, WLM extremists made big claims that they would hold a rally and hang a banner off an interstate overpass. There were also rumors of a rally at the Montana Capitol, which would have provided the optics that groups like this crave – white nationalist signage with the Capitol building and flags in the background. In the end, the small group of Nazis stood with their signs at a Helena intersection and left without any splashy activities. No banner hung on the overpass and no rally at the Capitol took place. When a counter protestor showed up and started filming WLM sign holders at the intersection, an extremist allegedly pulled out a hammer and threatened them. On Telegram, a prominent member of the Montana chapter posted, “I carried a hammer at the demo Saturday lol.” This extremist has been previously identified as Sebastian Campbell, a transplant from Kentucky now living in the Flathead.

Because their numbers are so small, WLM extremists in Montana travel around the state to make it appear that their racist group has a statewide presence. Our research indicates that most of the WLM supporters who appeared in Helena over the weekend drove in from different places in the state. It’s clear that each activity in which WLM engages is designed to radicalize more people to their movement, advertise Montana as a perfect Aryan homeland, and draw white nationalists to the state.

Whenever groups like WLM feel comfortable enough to show up in public, communities should be concerned. Their sad stunt over the weekend served two purposes. The WLM chapter wanted to: 1) get publicity and recruit new followers, and 2) create a presence that intimidated and threatened Jewish, BIPOC, and LGBTQ+ folks.

Their plan backfired. Instead of making people feel targeted and alone, their presence has brought together many community members who are organizing to share information and remove any sign of WLM’s presence as quickly as it pops up. Though Saturday’s event was little more than a fringe showing, membership in WLM can be expected to grow. The small presence in Helena should not be interpreted as a reason to dismiss the legitimate threats that WLM presents. WLM reminds us that community members and leaders need to consistently denounce discriminatory and bigoted ideas and work to support BIPOC, Jewish, and LGBTQ+ Montanans who are endangered by white nationalist ideology. In other words, the best way to resist violent extremism is to publicly support and protect the people they target.

The WLM racist honk-and-wave also can serve as a reminder that white nationalists add nothing positive to our communities. While they don’t create racism, antisemitism, and other forms of bigotry, they definitely prey upon and amplify the resentment and division that already exist in our communities. To stop groups like WLM, we all need to work to make our communities safer and healthier places for everyone. What happened this weekend in Helena is a perfect time for all of us to look ahead to the new year and decide which organizations, institutions, and leaders we are going to support.

MHRN has helped communities face these threats before, and we can do it again. We must refuse to let these attacks on our communities become normalized. You can join us by taking action and making a donation here.