Jordan Hall Wants You to Pay His Legal Bills

This fall, the extremist pastor Jordan Hall from Sidney, Montana, has made a huge show of touring local towns around Montana to claim he’s standing up for “God, County, and Family.” His real mission is to get other people to pay for his legal defense in lawsuits brought against him for his heinous attacks on LGBTQ+ people and their allies.

His strategy is conniving and cruel. Through posts on his extremist blog, the Montana Daily Gazette, and in-person interactions, he is targeting people in the LGBTQ+ community, specifically trans folks, as they are going about their daily lives. Then he finds a reason to verbally attack them or print misinformation about them. When people use their legal rights to protect themselves from Hall’s abuse, he lawyers up, tries to hide behind the First Amendment, and then begs for money to cover the lawsuits that he provoked. 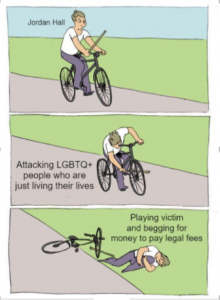 Hall is using a strategy that we’ve seen other Far-Right activists deploy, including white nationalists like Andrew Anglin and Richard Spencer. They post hateful statements and incite others to do the same. When they’re held accountable for their outrageous, dangerous actions, they claim they are the real victims, because they’re “just” exercising freedom of speech. Judges have disagreed, sometimes to the point of awarding millions of dollars to people who have been attacked.

Hall frames his attacks on transgender people in overly dramatic terms, claiming that he is being attacked. The harmful narrative he’s hawking is that transgender people and the organizations that support them are the evil giant Goliath from the Judeo-Christian faith. Hall considers himself the rock that God is flinging to defeat Goliath.

In reality, Hall is generating controversies, then soliciting donations to clean up the legal trouble that he created, and getting more funding for his extremist blog and podcast. In his presentations, he admits that he’s having a hard time getting support around Sidney, so he’s looking for easy marks elsewhere. So far, Hall has been wandering around the state (28 cities, he claims) looking for handouts from supporters of the John Birch Society, Flathead Liberty Coalition, local chapters of Ammon Bundy’s People’s Rights group, and other anti-government, pro-militia groups that frequently have “Liberty” or “Patriot” in their names. Where do these donations go? Straight to his church. According to Hall, he’s running them through his church’s “Religious Liberty Fund.”

To sell this warped story, Hall isn’t eliciting tears. He’s trying to poke organizations and people who are defending trans folks, issuing insults and violent threats. One of his standard “tough guy” spiels is a threat against an attorney who is defending a trans, Indigenous organizer who Hall printed misinformation about. Hall claimed this attorney needed to be taught a lesson using the “coyote treatment,” which Hall says involves shooting a coyote and tossing it over the fence as a warning to other coyotes. Hall went one step further by bragging that he’d placed the attorney’s name up on a wall with trophy mounts of animals that he’s killed.

In September, he looked for handouts in Kalispell, Billings, Great Falls, Havre, and Hamilton. In November, he brought Leah Southwell from the John Birch Society along to Columbus, Livingston, Clinton, Lewistown, Bozeman, and Kalispell. His recent stop in Clinton pulled in Sen. Theresa Manzella (R-Hamilton) who callously claimed that LGBTQ+ Montanans who are afraid of discrimination and violence targeting them are dealing with the “normal consequences associated with the choices they made.”

What We Can Do

Hall’s tactics are a permission slip for supporters of extremist groups to target and harass LGBTQ+ Montanans so they feel alienated and afraid. It’s alarming to see him speak and act with such cruelty toward people who have every right to live in safety in this beautiful state.

MHRN doesn’t list the times and locations of any of his rallies, because we refuse to give him attention and free advertising. Thank you to everyone who has sent us information about his anti-LGBTQ tour. Our best defense is to support LGBTQ+ community members and the organizations who support them. Any time or resources spent on refuting Hall is time wasted. Instead: