MHRN Update: Violent Extremist Activity in Montana since Attacks on the U.S. Capitol

For decades, MHRN has warned about the risk of violence by anti-government, white nationalist, and other Far-Right movements. Grounded in racism, antisemitism, and sexism, these movements stridently oppose efforts to create a multi-racial, inclusive democracy. When they lose at the ballot box, they turn to the cartridge box. 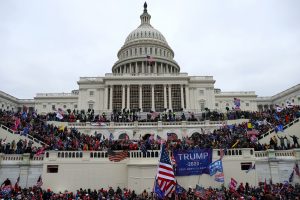 The violent actions on January 6, 2021, in Washington D.C. that included an attack on the U.S. Capitol didn’t come out of nowhere. Instead, it was a culmination of decades of organizing and practicing these types of anti-democratic tactics with the intent of harming all of us and scaring us away from accessing and using our rights. These anti-democratic forces have been normalizing their strategies in the West in many ways, including attacks on government workers on public lands and public health officials at their homes. They’ve attacked statehouses in Oregon, Virginia, and Wisconsin. The warning signs were there long before the attack on the U.S. Capitol.

Now that everyone is watching, we see Far-Right activists falling into two different camps. Some are deepening their commitment to authoritarianism, while others are questioning if they’ve gone too far. Law enforcement is sounding the alarm over the potential for more attacks on capitol buildings across the country. However, MHRN is seeing some indications that extremists in Montana aren’t planning large gatherings in public spaces.

We hope this continues to be the case and that extremist groups don’t instigate armed rallies at public buildings this month. At this time, MHRN isn’t issuing a warning about any specific events. However, as we know from experience, the threats to multi-racial inclusive democracy will continue. It’s not if, but when, unless we act. We suggest the following:

If you see any armed rallies or protests happening in your community, please document and report it. You can file a report with MHRN. We will enter it into our database of incidents on discrimination, harassment, and violence, and make sure you have the support you need.

MHRN will continue to share information to keep you informed. We will continue to provide opportunities you can use to engage your elected officials, to support targeted communities, and to use smart tactics that are consistent with our values.

Militia Sheriff Featured in Helena to Stoke A...

Militia Sheriff Featured in Helena to Stoke A...

Montana Businesses and Organizations Oppose A...

Montana Businesses and Organizations Oppose A...