In 2018 a group of community members in Carbon County became concerned about the flying of Confederate flags and the appearance of other symbols of hate in the area. They didn’t want to see Carbon County become, or become known as, an unwelcoming place.

The community members turned to the Montana Human Rights Network (MHRN), contacting the organization in 2018, and a collaboration formed. The result was the development and placement of a powerful billboard on Montana Highway 212 near Red Lodge. The billboard proclaimed, “Hate Has No Home in Carbon County” and featured crossed out images of a Confederate Flag and Nazi Swastika, common symbols used by white nationalists.

Since that time, so much great work has taken place in Carbon County. Local community groups formed that are working for LGBTQ+ equality, racial justice, and economic justice. However, in July, bikers came to Red Lodge for a motorcycle rally and harassed local civil rights marchers, with local police failing to intervene. In response, the Carbon County residents who previously supported MHRN and the billboard decided it was time to relaunch the “Hate Has No Home in Carbon County” campaign.

This time around, they made a change to the image used. They added the recognition that we all live on stolen land, mentioning that we stand with our Indigenous friends and neighbors in fighting hate. The local group has a multi-part plan for the campaign. First, if you click on the image below, it will take you to a PDF that is formatted to print on an 8.5×11-inch sheet of paper. People in Carbon County are encouraged to print the PDF and post it in their home’s front window, at their office, etc. They can ask their friends to do this as well by forwarding this link: https://tinyurl.com/NoHateInCarbonCounty. 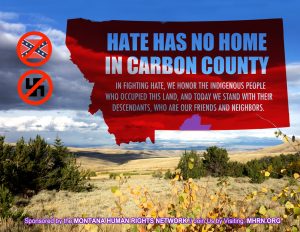 The group is also raising money to make yard signs featuring the image. This gives Carbon County residents another way to show their support for the campaign. People in Carbon County who want a yard sign can click here and fill out the form. It can be shared with friends by forwarding this link: https://bit.ly/2HuHiQE. MHRN will be back in touch when it has the yard signs printed!

Finally, the group decided that a billboard wouldn’t work this time due to a lack of good available locations. However, we’d still like to have the “Hate Has No Home in Carbon County” message featured prominently as people approach or arrive in Red Lodge on Highway  212. If you happen to know of a local business or residence near the highway that would like to display the image in banner form, please let us know by emailing network@mhrn.org.

MHRN continues to honor the wishes of the local community members wanting to remain anonymous. Their desire is to keep the focus on the message, not the Carbon County residents who are behind it. MHRN is honored that the community members decided we are the organization with which they wanted to work.

A statement on the murder of George Floyd and...

A statement on the murder of George Floyd and...