We’ve noted with concern that local chapters of “People’s Rights” are popping up in communities throughout Montana. We’ve been sounding the alarm that the person behind creating People’s Rights is none other than Ammon Bundy, a member of the insurrectionist family that orchestrated armed standoffs in both Nevada and Oregon.

Some local activists have argued Bundy has nothing to do with their groups. While it is true that he likely isn’t distributing specific agenda items for their monthly meetings, these local groups fall under Bundy’s national umbrella. In this video, he discusses how he started People’s Rights and continues to fan its flames as the group spreads across the country.

We don’t think it’s a coincidence that Bundy has tried to keep his name from being synonymous with People’s Rights organizing. Ammon and the rest of the Bundy Family have shown that they exploit anger at the local level and contribute to blowing up situations into armed standoffs. His family’s previous infamy has saddled Ammon Bundy with negative political baggage.

The decentralized nature of People’s Rights allows Bundy to create a network of activists he can call upon later. By using the generic-sounding name of “People’s Rights” instead of something like “Ammon Bundy’s People’s Meetings,” local groups are able to draw in unsuspecting friends and neighbors, many of whom would want nothing to do with a Bundy operation. Ammon Bundy is purposely trying to dupe our communities, and we cannot fall for it. 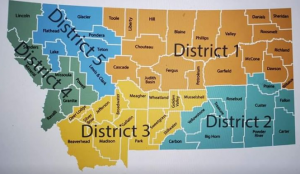 People’s Rights has divided the state into five districts for organizing purposes.

While local People’s Rights groups may not be receiving specific marching orders from Bundy, they are helping build an organization that follows the Bundy Way. The Bundy Way prioritizes armed insurrection against the government and divisiveness in communities. In Nevada and Oregon, the targets were land managers. For People’s Rights, it’s clear the targets right now are local community members and healthcare professionals trying to prevent the spread of COVID-19. Local public health officials have replaced the Bureau of Land Management, as People’s Rights elevates individualism and attacks efforts to build community and address public issues through our government.

So far, we know of People’s Rights meetings happening in a handful of communities. People’s Rights has already divided Montana into five districts as it continues organizing. The state coordinator for Montana, Nick Ramlow, told a militia-based podcast that the group hopes to establish an “Uber-like” militia response system that can be mobilized at any time.  It’s important to remember that these types of private police-like forces of which Ramlow speaks aren’t legitimate law enforcement entities and aren’t accountable to anyone but themselves.

Ramlow frames these militias as defensive efforts. However, it’s important to remember that the Bundys claim their armed standoffs with federal agencies in both Nevada and Oregon were defensive in nature after they created and provoked the situations. Ramlow has boasted about working with militia groups around the state. After he took a trip to Billings, a leader of the Yellowstone Militia of Billings added to his Facebook profile that he was part of the “Physical Defense Committee” of People’s Rights.

Ammon Bundy has discussed that he wants People’s Rights chapters in communities across the country. As the activity grows in these local chapters, we need to remember that inclusive democracy doesn’t happen at the end of a gun barrel. The Bundy Way isn’t the Montana Way, and we don’t want the next Bundy-inspired armed standoff happening in one of our communities.