Anti-racist activists and concerned communities around the state are protesting in response to the murder of George Floyd in Minneapolis. At the same time, Far Right paramilitaries are spreading rumors to encourage violence against people of color and their supporters. MHRN is sharing the facts behind these rumors and offering two actions that community members can take to help prevent the violence that these activists of the Far Right crave. 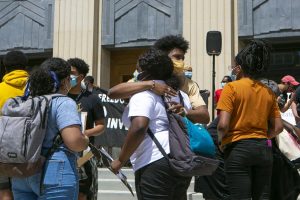 The Bozeman Daily Chronicle featured this photo of the anti-racist protest held in Bozeman on May 31, 2020.

Late Monday, former state Senator Jennifer Fielder set off a firestorm of misinformation regarding anti-racist events in Montana. She posted a note on Facebook warning that “multiple reports from credible witnesses” said a caravan of Antifa members was planning to infiltrate anti-racist protests planned in Coeur d’Alene, Idaho, before heading to Missoula. Since this post went live, variations on Fielder’s claims have been shared far and wide in militia and other anti-government Facebook groups. Members of these groups have responded by fantasizing about the chance to shoot Antifa demonstrators.

There were several problems with Fielder’s claim and the agitation it created, but the most important one was this: There was no caravan. MHRN thoroughly researched the situation and was unable to find any solid proof of a caravan, and neither could several law-enforcement sources MHRN contacted. Instead, the claims made by Fielder followed an “Antifa Fantasy” template that is sweeping the country. Both the Associated Press and the Idaho Statesman have published articles debunking the claim. Additionally, the Kalispell Police Department issued a statement yesterday that says it has no information of “any outside groups” planning events in their area. A Montana Public Radio piece quoted the Missoula Police Department making similar statements.

MHRN is issuing this information because facts matter. MHRN is also concerned that this Antifa Fantasy is being exploited by armed militia groups to divide our communities and intimidate peaceful protesters.

The Reason for the “Antifa Fantasy”

MHRN believes the real goal of this Antifa Fantasy is to mobilize armed right-wing activists to show up and interfere with peaceful protests in our communities. By making it sound like protesters could be out-of-state Antifa members, it’s easier for armed militia activists to try to justify violence towards people of color and concerned community members at anti-racist events. After spending much time researching these rumors in many anti-government Facebook groups, MHRN’s Travis McAdam stated:

“I can tell you these militia folks have very itchy trigger fingers and are excited by the possibility of ‘protecting and saving’ their communities. When Antifa hasn’t shown up, the armed militias are taking credit for scaring them away, even though the caravan never existed.”

The rumors have already helped turn out armed activists at anti-racist protests in the state. MHRN is receiving consistent reports from community activists that versions of the Antifa Fantasy are spreading fast in communities. Some reports also claim armed militia members are planning to show up at future anti-racist protests, while some militia activists are offering to protect local businesses from the supposed Antifa protesters.

“The armed activists showing up at anti-racist protests want to intimidate people at these peaceful events,” said McAdam. “They want confrontation. They want protests to turn violent, so afterwards they can blame racial justice supporters for the situation.”

What You Can Do In Your Community

MHRN recommends that community members call on their local governments to publicly denounce the rumors and make a statement rejecting the presence of armed paramilitaries at peaceful anti-racist protests held in their communities. Find a list of local government leaders here: https://mtleague.org/basic.

At the protests themselves, MHRN encourages attendees to stay safe. This means refusing to feed the conflict that counter protesters and armed militia members want to play out for the media covering the events. Any interaction could escalate into a dangerous situation for protest participants and especially people of color. MHRN encourages protest attendees to have a safety plan that includes:

There are many compassionate, thoughtful people who are organizing these events to bring community members together. However, it’s important to be aware of unsubstantiated rumors, the entities that are promoting the rumors, and strategies to have safe, peaceful events that support anti-racism and people of color.

MHRN wants people to know militias are showing an increased interest in local anti-racist protests, and some of them are indicating that they may attend. Adding armed people with vastly different intentions and goals into these emotionally charged spaces is concerning. That said, MHRN hasn’t seen any specific plans detailing armed attacks on anti-racist protesters. If MHRN comes across such information, it will immediately be shared with local organizers and authorities.