While three Montana communities recently awoke to find neighborhoods papered with conspiratorial antisemitic literature, there has been an impressive and robust response from city governments, media, and Christian leaders to support the Jewish community and denounce the hateful acts. The swift and clear messages countering the acts of antisemitism are even more remarkable given the current challenges for governments, churches, and community organizations during the public health crisis due to COVID-19. 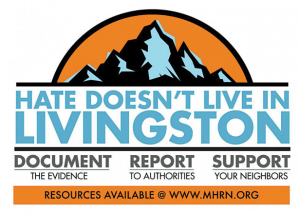 A Livingston community member designed this image for people to display in response to an antisemitic literature drop.

At the same time these community responses have been taking place, human rights groups continue to voice concern about the increased mainstreaming of antisemitism. A recent example includes Gallatin County Republicans using a common antisemitic trope in a recent fundraising letter.

During the middle of April, leaflets that blamed Jewish people for economic hardship and used a fake quote from JFK were left on hundreds of cars in Butte and a handful of cars in Livingston and Billings. The Montana Human Rights Network, the Anti-Defamation League, and the Montana Racial Equity Project all received reports of the fliers  from concerned community members.

“These types of fliers are a common tactic used by extremists across the country – particularly on college campuses – to promote division that embraces white supremacy, xenophobia, and antisemitism. This is never acceptable, but under the current circumstances and while our communities are battling the Covid-19 pandemic, this type of hateful conduct is particularly jarring for the communities targeted. We are actively monitoring for similar activity across the region and are in touch with community leaders.”

The Livingston City Commission acted swiftly, in what the Montana Human Rights Network call “a model response.” Community members reported the fliers on the organization’s online form for hate incident reporting. Some folks contacted law enforcement, city commissioners made a strong statement in an official proclamation, and other community members devised ways for Livingston residents to take action.

“Antisemitic actions are an affront to all communities and faiths. We stand with each other in condemning these latest acts of hatred and division. We pray and work all the more diligently for a peace and love in our communities that comes from all faiths standing together for what is right and good. Each of us longs to be the best allies possible for those among us being subjected to hatred and violence on account of their own faith tradition. Antisemitism is an ages-old divider of community, and it is intolerable wherever it rears itself.”

In Billings media outlets played a central role once again, echoing their opposition to antisemitism from the 1990s through today in a staff editorial. In Butte, which was hit particularly hard with nearly 100 of the antisemitic fliers, concerned community members continue working with the local newspaper to respond and show support for the local Jewish community. Local law enforcement responded quickly to the fliers, as the sheriff’s office had deputies out in the neighborhoods that morning taking statements from witnesses and picking up and disposing of the fliers.

While Jewish leaders responded to the antisemitic fliers and continued serving their own Synagogues rearranged during the challenging COVID-19 pandemic, they also had to deal with mainstream entities spreading antisemitic ideas. The Gallatin County Republican Party sent out a fundraising mailer that used a common symbol to evoke antisemitic conspiracy theories regarding Jewish people trying to create and control a global government.

“Fliers and graffiti are scare tactics by nefarious cowards in the night. When a mainstream political party uses antisemitic symbols to rile up their base and shake election funds loose, not only is it low, but it’s deeply concerning, because it further normalizes antisemitic and bigoted ideas.”

“When politicians and far right activists use George Soros as the stand in for the false conspiracies about Jewish people, it shouldn’t be taken lightly. The mass murderer who killed 11 at the Tree of Life Synagogue in Pittsburgh in 2018 was particularly inspired by a Soros-based Jewish conspiracy. This isn’t about political parties or candidates. This is about spreading bigoted ideas that divide our communities.”

The Gallatin Valley Interfaith Association responded to the flyers and mailer as well, stating,  “The Gallatin Valley Interfaith Association (GVIA)–consisting of leaders from many Christian denominations, Muslims, Jews, Buddhists, Unitarian Universalists, and others—unites to say unequivocally that hate, religious bigotry, and anti-Semitism are unacceptable in our community and state.”

Rabbi Mark Kula of The Montana Association of Rabbis (MAOR) echoed the concern on behalf of many in the Jewish community. “We continue to be appalled by these attempts at intimidation and the increasing use of these conspiracies that falsely explain very complex societal problems. However, we are heartened by the response of our friends and allies in the faith and human rights community. As this challenging time has demonstrated, we are stronger when we act in unity,” stated Rabbi Kula.

The Montana Human Rights Network has an online form where community members can report incidents of harassment and intimidation, including antisemitic and racist literature drops. The form can be accessed at: https://mhrn.org/reportingform.

How to Respond to White Supremacist Activity ...

How to Respond to White Supremacist Activity ...