UPDATE! Bukacek, Ramlow, and Anti-Government Activity in the Flathead

A couple of weeks ago, the Montana Human Rights Network posted an article about how anti-government activists in the Flathead were organizing against public health efforts by the City of Kalispell to contain the spread of the coronavirus. Our local affiliate, Loves Lives Here, provides this update about the situation. 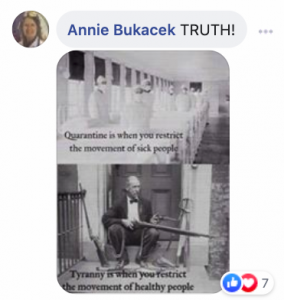 Annie Bukacek has protested public health measures by using the talking points of the anti-government movement.

Here’s an overview for those of you who don’t need every detail. In early April, Dr. Annie Bukacek released a video of misinformation about COVID-19 that she’s using to promote anti-government talking points taken straight from dangerous “patriot” extremists like Ammon Bundy. Since then, we’ve discovered that she’s connected with a group of local anti-government activists who are threatening local officials and trying to get businesses to defy public health directives from the state and county.

Along the way, we were reminded that the Flathead County Commission appointed Bukacek to the City-County Health Board late last year without allowing for a public comment period. In spite of community objections to her recent actions, the commissioners are (so far) refusing to make this topic an agenda item for future meetings. If that’s all the information you need, here’s what you can do about this situation.

Instead of getting discouraged, we’re going to get persistent. The public deserves to be heard on this issue, and we will keep reminding them — and the entire community — that elected officials serve the community. We will alert you each time we think another round of emails would be useful. Right now, we’d like you to send an email to the county commissioners addressing one of these topics:

Here are those email addresses!

Want All the Details? Dive in Here.

Annie Bukacek has been involved with anti-government and anti-choice groups in Montana for years. This month we’ve seen her comment frequently in “liberty” and “patriot” Facebook groups that are trying to start a local sovereign citizen group styled after the destructive work of Ammon Bundy and his family.

Just his week, Bukacek weighed in on a post criticizing a local toy store, Imagination Station, which has established clear safety guidelines for customers in their store. Bukacek once again dismissed concerns about the seriousness of the COVID-19 virus via Facebook comments and promoted a video that has been condemned by the American College of Emergency Physicians (ACEP) and the American Academy of Emergency Medicine (AAEM). Her public Facebook page is also full of posts promoting conspiracy theories and misinformation that contradicts directives from the health department and the larger medical community. 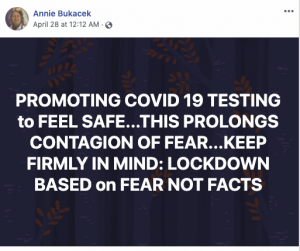 A few city council members in Whitefish and Kalispell expressed their concern about Bukacek’s actions and attempts to divide the community with misinformation, but it appears that the majority of county commissioners who appointed Bukacek are refusing to bring the matter up in a future meeting.

First they told community members that they could not remove Bukacek unless she had committed a crime (sometimes saying it would have to be a felony) and that her comments were a matter of free speech. However, bylaws state that any county board members serve at the pleasure of the commissioners. That certainly seemed the case when the commissioners replaced dedicated, experienced board of health members Dr. David Myerowitz and Dr. Wayne Miller, who had not committed any crimes or stirred up community controversies.

Until last week, the minutes from the December 2019 board of health meeting (Dr. Myerowitz and Dr. Miller’s last meeting) were noticeably omitted from the board of health’s website. Also missing was a long statement from Dr. Meyerowitz claiming that he was being replaced with unqualified people who were loyal to the current county commissioners. Please read the minutes and the statement from Dr. Myerowitz (links above in this paragraph) for a better understanding of the whole situation.

During our research about Bukacek’s anti-government connections, a new name popped up. Nick Ramlow, a Kalispell contractor who specializes in concrete finishing, acts like the Ammon Bundy of the Flathead. Along with Bukacek, he has organized “People’s Meetings” where he insists that the stay-at-home directive from the governor’s office and the closures recommended by the public health department are illegal, which is consistent with sovereign citizen principles.

Nick Ramlow asked around on social media for the Kalispell Mayor’s home address.

We were alarmed to see that Ramlow offered a bounty of $100 for the address of Kalispell’s mayor so he could make a citizen’s arrest. It’s one thing to disagree over policy decisions, but targeting public officials at their homes is an obvious intimidation tactic. Ammon Bundy is using the same strategy over in northern Idaho right now.

In addition to posting updates about his efforts on his personal Facebook page, Ramlow has been casting about social media looking for help. This includes many anti-government Facebook groups, including one for the Montana Militia. These are the circles from which Ramlow is trying to create a following. These are also the same circles in which Bukacek travels. She recently told a local newspaper she considers herself a “sovereign citizen.”

What happens when sovereign citizens establish a presence in communities? The Montana Freemen serve as one horrific example. It’s also worth noting that the FBI has considered the sovereign citizens to be a domestic terrorist threat.

Our ongoing concern is that Bukacek will undermine safety protocols created by individual businesses as they try to reopen safely. These businesses have the right to evaluate their needs as they comply with health department regulations. We’re not sure why Bukacek insists that businesses should open and then criticizes them for trying to protect their customers and the community by opening carefully. 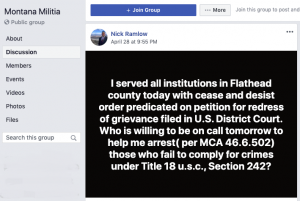 Nick Ramlow has posted all over social media about his intentions to arrest public officials at the local and state levels. Many of the posts have been made in Facebook groups for anti-government groups, such as this one in Montana Militia.

The county commissioners can’t have it both ways. They appointed her in a public role and now are trying to promote the idea that Bukacek’s very public statements and protests against health department directives are somehow completely separate from her position on the board. She is using her perceived credibility as a physician to promote misinformation about COVID-19, and she is on the board of health because she is a physician. The two are not separate.

Nick Ramlow’s actions — and Bukacek’s involvement with him — are also deeply troubling. We know that they are using concerns around COVID-19 to increase involvement in their sovereign citizen movement, and this could easily cause someone to turn to violence. We will keep you updated on this situation as more information is available.

Thank You to Our Supporters!

If you’ve made it to the end of this blog post, THANK YOU! The recent increase of anti-government and anti-democratic activity in Montana is definitely a concerning trend, and it helps to know that many people take it seriously.

We want to extend a special thank you to all of the people who have already written letters to the county commissioners, made public comments to city council members in Kalispell and Whitefish, and who are helping Love Lives Here research the anti-government groups that are popping up. We are grateful to have a strong community that cares about the well-being of everyone in the Flathead Valley!