An anti-choice doctor previously investigated for Medicaid fraud is leading the charge against public health in Kalispell. Dr. Annie Bukacek is already well known to the Far Right in Montana, and she is now trying to gain attention by criticizing public health advice designed to slow the spread of the COVID-19 pandemic. Bukacek’s history includes discriminatory views about LGBTQ+ people, opposition to church-state separation in public schools, taking anti-vaccine positions, and her bizarre tactic of using tiny plastic fetus replicas during her efforts opposing women’s reproductive health access in Montana.

Earlier this week, the Kalispell City Council followed most other Montana localities and declared a state of emergency due to COIVD-19. This action allowed the city to access emergency funding and gain more flexibility in responding to the pandemic. It also allowed the city to enforce the Governor’s shelter-in-place policy to help contain the spread of COVID-19. This action is designed to preserve public health. However, anti-government talking points and misinformation quickly escalated, claiming such precautions attacked constitutional rights. Annie Bukacek has been the ringleader opposing the city council’s action. 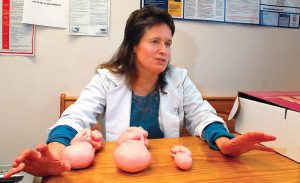 Dr. Annie Bukacek pictured on the website for the Montana Pro-Life Coalition with the plastic fetus replicas she uses while lobbying for anti-choice policies.

Calling the city council’s declaration a step towards imposing “martial law,” she organized a protest outside City Hall the following day. Invoking martial law reveals much about Bukacek’s ideology. Many militia adherents use similar language to oppose public health measures like shelter-in-place orders. The militia and anti-government “patriot” movements preach that a one-world government conspiracy theory is always afoot, which will end with the government disarming citizens and declaring martial law. They’re using the current pandemic to amplify their rhetoric. Bukacek’s decision to frame the city council’s efforts around public health and safety as a sinister government action does nothing but make public officials targets for harassment and intimidation. It also cements her status as, not just an anti-choice activist, but part of the broader Far Right movement.

Her ideologically hostile view toward her local government’s emergency action on COVID-19 isn’t limited to the protest. An online video of Bukacek features her undermining the CDC’s reporting process of deaths related to the coronavirus. During her short presentation, she fused anti-government talking points with criticism of the medical field’s fatality reports. A few examples include her saying:

While there are significant challenges to reporting data during the pandemic, Bukacek isn’t really debating procedure or discussing overloaded hospitals that are struggling to treat COVID-19 victims. Instead, she uses these challenges to promote militia-inspired ideology and distrust of governmental institutions. Her comments and actions are not focused on keeping the community safe. Instead, her message is about sowing distrust of and undermining local public officials and first-line responders to the pandemic. Bukacek’s divisiveness in a time of an unprecedented health crisis seems like an attempt to recruit more people to her twisted anti-government ideology.

Bukacek’s actions and message are gaining traction, because her position as a doctor gives her a sense of credibility that other Far-Right agitators trying to exploit the pandemic lack. She’s also aided by the fact that the Flathead County Commission installed her as a member of the Flathead City-County Health Department’s Board of Health in December 2019. The commission replaced two longtime members with distinguished careers in the medical field when Bukacek was appointed. At the time, the members not reappointed noted Bukacek’s opposition to vaccines as one of the many reasons she shouldn’t hold a position on the Health Board.

During the controversy over the appointment, Flathead Commissioner Pam Holmquist responded that there were no qualifications necessary to serve on the board, and that the commission wanted a diversity of opinions represented. Given that Bukacek is now using her position on the Health Board to undermine measures to protect the public’s health, it’s clear the opposition was warranted. Bukacek is now able to use both her medical degree and her place on the Health Board to protest the exact efforts her peers in the Flathead medical community are supporting when it comes to the pandemic.

This is hardly Bukacek’s first time bringing Far-Right beliefs into the public square. She is the longtime anti-choice leader of the Montana Pro-Life Coalition, which formed in 2009 and pledged “aggressive legislative, political and educational advocacy on behalf of the unborn.” The Coalition repeatedly failed to qualify an anti-choice initiative for the statewide ballot. The ballot initiative would have defined life as beginning at fertilization and granted a fertilized egg due process rights separate from those of the pregnant woman. These efforts were blatant attempts to ban abortion in Montana, and they would likely have negatively impacted other medical decisions, such as in-vitro fertilization and access to contraception.

The Coalition tried repeatedly to get the measure on Montana’s General Election ballot, but they could never get enough support to make it happen. Bukacek and the Coalition have also supported bills promoting the same agenda during Montana legislative sessions, also without success.

Bukacek is a notorious letter-to-the-editor writer whose diatribes generally reflect the Religious Right’s hatred of reproductive freedom, the LGBTQ+ community, and public schools. She’s stated that members of the LGBTQ+ community engage in “sexually deviant behavior” and claimed that equality under the law “threatens the foundation and stability of our nation.” She has also complained that public schools have “duped” most Americans into believing “deceptive philosophies” that support the separation of church and state. The separation of church and state is Constitutionally enshrined and has broad public support.

Bukacek served as a spokesperson for the Coalition for Protecting Patient’s Rights during the original debate over the Affordable Care Act. The group sent her to Washington DC to lobby against passage of the measure. In one interview, she claimed that the number of people who need health coverage and can’t afford it is blown out of proportion. In November 2009, the media reported Bukacek was being investigated for fraud regarding the Medicaid billing practices at her private practice. She allegedly submitted Medicaid reimbursements for time she spent praying with patients.

In addition to testifying before committees of the Montana Legislature, Bukacek frequently engages the internal fight happening within the Montana Republican Party. She constantly backs the Far-Right faction of the GOP and attacks more moderate members of the party. She’s also been a consistent ally of Chuck Baldwin, the pastor in the Flathead Valley who serves as the unofficial reverend of the militia movement. She currently sits on the board of the Montana Shooting Sports Association, which regularly supports militia-based ideas.

Bukacek and the Bundys

Bukacek has become a member of the Far-Right chorus that is undermining attempts to prioritize public health and limit deaths during the COVID-19 pandemic. Another prominent voice selling militia conspiracies is Ammon Bundy, a member of the notorious family that made headlines for their armed standoffs with federal agencies in both Nevada and Oregon. Members of the opportunistic Bundy family have spoken a handful times in Montana over the past few years, selling their militia-based revolution and looking for their next outpost. The majority of Montana communities have made it clear that the Bundys’ opportunism, aggression towards government, and opposition to public lands are not supported by most Montanans.

Ammon Bundy recently made headlines for telling supporters in Idaho that he’d bring anti-government forces to help people wanting to defy shelter-in-place orders during the COVID-19 pandemic. Similar to Bukacek, the Bundys don’t build inclusive communities. Instead, they foster divisiveness with their anti-government stunts. Safety always takes a backseat to armed revolution in their worldview. Bukacek and Ammon Bundy, organizing a couple hours away in northern Idaho, are opportunists who are capitalizing on the fear and uncertainty of the current pandemic. Instead of supporting community cohesiveness, smart public-health measures, and policies that protect people, they are risking lives for the sake of militia ideology and personal notoriety.

The Montana Human Rights Network has been researching and responding to white nationalists and anti-democratic extremists for 30 years. It’s clear these groups exploit every difficult circumstance in order to promote their agenda. Since more people are getting their COVID-19 updates online, anti-government militia activists are looking for openings on Facebook, YouTube, Instagram, and other platforms to amplify their talking points. They are targeting websites with an uptick in visitors, like places promoting survivalist tips, alternative medicine, COVID-19 updates, and more.

Since it’s difficult to fight an unseen and terrifying enemy like a disease, extremists are trying to provide real life targets at which people can direct their anxiety. For Bukacek, the enemy is her own local government. At a time when governments are needed to lead our collective efforts at public health, communities should continue listening to those who prioritize “flattening the curve” of COVID-19 and keeping the public safe. That includes public officials like the Kalispell City Council who are making decisions to lead with the best practices overwhelmingly endorsed by the medical community. Bukacek’s divisive ideas and activism are dangerous at a time when community and safety are clearly essential.

MHRN Teams Up with “Hate Has No Home in Carbo...

MHRN Teams Up with “Hate Has No Home in Carbo...