Charlie Kirk, the founder and leader of Turning Point USA (TPUSA), is scheduled to speak at an event for the Flathead County Republican Central Committee this weekend. Since Kirk has made a career out of spreading misinformation, the Montana Human Rights Network (MHRN) is issuing a report examining the divisive beliefs of Kirk and TPUSA, including staffers like Candace Owens and campus chapters around the country. 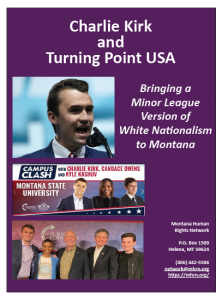 Titled Charlie Kirk and Turning Point USA: Bringing a Minor League Version of White Nationalism to Montana, MHRN’s report is one of the most comprehensive reviews of  TPUSA activity to date. It details how Kirk and TPUSA have built their reputations by organizing conservative students on campus, targeting faculty, and funneling money into campus elections. It also delves into TPUSA’s constant problems when it comes to white nationalism and its staffers making racist and anti-Semitic statements.

“Our reference to ‘minor league’ in no way means Kirk and TPUSA should be underestimated,” says MHRN’s Travis McAdam. “Instead, it refers to TPUSA functioning as a minor league program for white nationalism. Hardcore white nationalists view TPUSA as prime recruiting ground where students are introduced to racist concepts and then can be moved up to more militant ranks.”

Kirk likes to claim he is self-made and that TPUSA is a grassroots organization, but TPUSA exists because a Tea Party acolyte took Kirk under his wing and introduced him to right-wing millionaires who fund the group. One journalist reports an early benefactor was tech millionaire Greg Gianforte, who currently serves in the U.S. House of Representatives for Montana. These millionaires got TPUSA up and running, but the real boost came when Kirk and TPUSA hitched their cart to Donald Trump during the 2016 presidential campaign. TPUSA’s income and staffing grew rapidly as Kirk became a friend and ardent supporter of the current president.

There are many examples involving TPUSA staff and members playing this high-stakes game with white nationalists that are described in the report. The report also discusses how Kirk and TPUSA do damage control as racist and anti-Semitic incidents become public. Kirk denounces white nationalism and racism publicly, while at the same time TPUSA uses back channels to mend fences with the exact people they are condemning.

“With all the racist incidents and efforts to mend fences with white nationalists, there is no way to take Kirk’s denials and condemnations seriously,” says MHRN’s Rachel Carroll Rivas. “Charlie Kirk would have to significantly overhaul TPUSA to really deal with these issues. However, time after time, Kirk and TPUSA show they only care about white nationalism, racism, and anti-Semitism when it leads to negative press coverage.”

The report includes a section looking at the three campus chapters that TPUSA lists for Montana: Flathead Valley Community College (FVCC), Montana State University (MSU), and the University of Montana (UM). MHRN confirmed with FVCC that there isn’t a current chapter on its campus. However, the chapters at MSU and UM are officially recognized student clubs. The report details the activities of the chapters and their leadership. It covers events chapters have held on campus, how chapter leaders work with national TPUSA, and the activities that result from their time with TPUSA, like running for seats in the Montana Legislature.

TPUSA capitalizes on the political curiosity of young people on college campuses. Those who join and buy into the program merely learn how to use dog whistle racism and conspiracy theories to drive political discord on campuses, according to MHRN.

According to MHRN, Kirk and TPUSA face many challenges to their perceived credibility, and it’s not just from the political Left. Organizations that have been TPUSA allies are now starting to question, and sometimes outright condemn, Kirk’s operating style. Young America’s Foundation has called out Kirk and TPUSA for taking credit for work they haven’t done and told its student followers to avoid getting involved with TPUSA.

Additionally, reporters have found that some of the students TPUSA touts as backing in elections have outright condemned the group. Former campus chapter leaders have complained that TPUSA doesn’t provide enough support, and TPUSA had a big, public falling out with music mogul Kanye West. All of these problems, especially when added to TPUSA serving as a minor league program for white nationalism, make TPUSA a horrible choice for students and communities as a whole.

“The people attending Kirk’s presentation will hear nothing but dog whistle racism and various conspiracy theories,” says MHRN’s Rachel Carroll Rivas. “The scapegoating and fearmongering are manipulative and wrong. Without it, Kirk has absolutely nothing to say.”

According to MHRN, part of the way Kirk and TPUSA frame themselves as victims is by hoping that protestors will be at their events. Since that only feeds Kirk’s narrative, MHRN is asking that people refrain from protesting at his presentation. Instead, its affiliate, Love Lives Here, is holding a community-building event where folks can come together and learn how to be a stronger, more engaged community. Called Kalispell Together: Community Over Conflict, the event will be held on Saturday, March 14, 2020, at the Northwest Montana History Museum from 2:00-4:00 p.m. More information about the event can be found here.

“Love Lives Here is accustomed to outside actors like Charlie Kirk coming in to create division and animosity within our community,” says Love Lives Here’s Cherilyn DeVries. “We’ve learned over the years that the best way to oppose this strategy is to come together and find ways make a positive difference in the Flathead Valley.”