Montana’s long history with militant anti-government activists, like the Montana Freemen, resurfaced again with the arrest in early July of a self-proclaimed sovereign citizen in Montana. Michael Duane Strain had been a fugitive for eight years following his indictment in Iowa for being a felon in possession of firearms. U.S. Marshals arrested him at a ranch on the Crow Reservation where he had lived for years. Authorities had previously thought Strain might be in Minnesota, Wyoming, or Utah, but a tip led them to the ranch in southeast Montana.

In Iowa in 2011, federal agents found thousands of rounds of ammunition and numerous firearms while searching Strain’s home. That led to his indictment on charges of being a felon in possession of firearms. Strain became a fugitive who made it onto the “Most Wanted List” of the Bureau of Alcohol, Tobacco, and Firearms. After he was captured in Montana, a judge stated he will be returned to Iowa to face the charges. In addition to the Iowa indictment, Strain’s criminal history includes obstruction, contempt of court, trespassing, fleeing a peace officer in a vehicle, and possession of explosive devices. 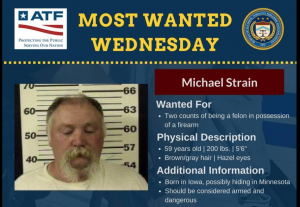 Court documents stated that the 62-year-old Strain calls himself a sovereign citizen. His behavior fits with that description. When he was taken into custody, he claimed the federal agents had no jurisdiction over him. Sovereign citizens believe that they get to decide which laws are legitimate and which ones can be ignored. It’s common for sovereigns to believe they don’t have to pay taxes or register/license their vehicles, while also claiming that judges, juries, and law officers have no jurisdiction over them. When they get into trouble with law enforcement, sovereigns routinely inundate local courts with phony “legal” documents featuring bizarre arguments written with practically unintelligible punctuation. Sometimes sovereigns go beyond this paper terrorism and engage in violent acts, often directed at law enforcement and other public officials.

The movement’s ideology is based in racism and anti-Semitism, even though some followers may not be fully aware of these origins. During the 1980s and 1990s, many white nationalists and anti-Semites were drawn to the sovereign citizen movement, as its ideology was built on the legacies of both the anti-Semitic Posse Comitatus and the segment of the anti-tax movement that believed Jews controlled the government and financial sector. Many of the activists from this time period also believed only white people could be sovereign. They argued that people of color only had rights granted by the government through the 14th Amendment. This, sovereign citizens argued, meant that people of color received rights from, and were subject to, federal and state law. This was an inferior position to white sovereign citizens who claimed they received their rights directly from God and followed whatever they deemed to be God’s Law. A longer profile of the sovereign citizen movement can be found here.

Michael Duane Strain’s arrest in Montana is just the latest in a long string of sovereign citizens living in Montana and getting into trouble with the law. The most notorious and well-known was the group known as the Montana Freemen. This was the group that engaged in an armed standoff with the FBI for 82 days in Garfield County during the mid-1990s. The standoff led to the arrest and prosecution of more than a dozen Freemen who were charged with crimes ranging from conspiracy and theft to fraud and intimidation While it’s now known as the sovereign citizen movement, it was common in the 1990s for these same types of activists to call themselves “freemen” who claimed to have regained their “sovereign citizenship,” “sovereign status,” “personal sovereignty,” etc. MHRN published this analysis of the Montana Freemen standoff shortly after it ended.

The arrest of Strain is a good reminder of the dangers posed by sovereign citizens. This is reflected in surveys of law enforcement that rank sovereign citizens as one of the greatest threats to communities. While many Montanans have a frame of reference for the term “freemen,” many community members may not know that sovereign citizens are the current iteration of the same dangerous ideas and must be addressed in our state.