At the beginning of June, the local newspaper reported that a woman in Butte had her home vandalized with racist anti-Indian graffiti. Vandals spray painted “Go Home,” “prairie n—r,” and “f—k you Indian lover” on the side of her trailer. The woman, Miki Chessmore, said this was the latest in a string of vandalism that started when she rented a room to an American Indian tenant. Police had no suspects in what the county sheriff correctly called a hate crime.

The Montana Standard ran this photograph of the vandalized home.

The 65-year-old Chessmore told the reporter she had two major concerns. The first was trying to cover up the racist graffiti. She and her tenant had managed to paint over it with some primer, but she lacked the resources to do anything else. The second more serious issue was that she was afraid to be in her own home at night. “I don’t know that these people wouldn’t do bodily harm to me,” she said. The fear was warranted, as this incident wasn’t just the most recent. It was also an escalation of bias-based actions directed at Chessmore and her tenant.

“I don’t know what they will do next,” Chessmore told the newspaper, “but people ought to be aware of the hatred and racism going on here.”

That’s exactly why MHRN got involved. MHRN staffer Travis McAdam visited Chessmore at her home the morning the news story was published. He talked with her and offered MHRN’s help in organizing a community response to the hate crime, in addition to trying to facilitate some efforts to fix her trailer and address her safety concerns.

MHRN has helped communities respond to these types of incidents for almost 30 years. It’s important for communities to unequivocally denounce hate crimes when they occur. These types of bias-based crimes impact not only the immediate victim, but they also send a message to members of the community who are part of that group, in this case American Indians. MHRN’s experience shows that, by elevating these types of incidents, the victims are safer since more people are aware of what has happened and are paying attention. A public response also helps reinforce with local law enforcement the need to take these incidents seriously.

When McAdam started reaching out to folks in the community, he discovered that a local painter had already posted online that he would repaint Chessmore’s home for free. Collins Painting got in touch with her and had its workers prepping her home within days of the report. About a week after the newspaper story, Collins Painting had finished its work. Chessmore had said she was worried that the vandals would come back and ruin the new paint job. Collins Painting told her that, if that happened, they would come back and cover it up! Chessmore and concerned community members can’t express how wonderful it was that Collins Painting stepped up, without even being asked, and painted her home for free. 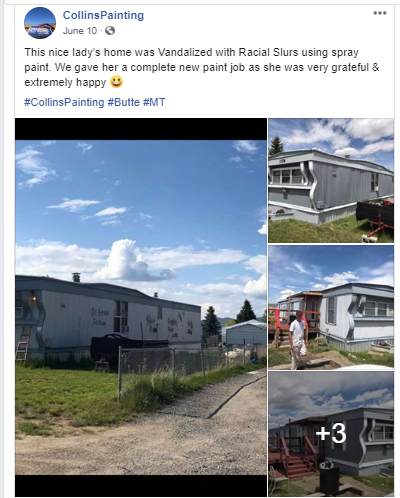 Collins Painting posted these images on Facebook when it finished repainting Miki Chessmore’s home for free.

While Collins Painting was doing its work, MHRN was reaching out to allies in the community to organize a community response. Activists with the Butte Area Rising Coalition and Indian People’s Action joined faith leaders and concerned community members at a planning meeting held a few days after the initial report. This group decided to hold a march and rally on Saturday, June 15, in Emma Park to denounce the hate crime and show support for Chessmore and her tenant. Folks also decided to try and raise some funds at the rally for Chessmore to make some security upgrades to her home.

“We’re inviting and asking the community to stand and march with us in solidarity against racism, bigotry, and the forces of hate in our community,” MHRN’s McAdam said in the press release for the event. “We want to make it clear that the targeting of people and constituencies in our community, and the fear it creates, won’t be ignored. Instead, we will stand together and continue working to make our community a better and safer place for everyone.”

The “CommUnity Rally Against Hate” was held on June 15 and began in Uptown Butte, with people marching from the Imagine Butte Resource Center to Emma Park. The lineup of speakers for the rally in the park included:

Close to 100 people attended the CommUnity Rally. Some sported homemade signs with slogans like “Hate was Never Great” and “Hate is not a Family Value.” Chessmore told attendees how difficult the situation had been, but she told those attending, “I’m just glad there are people that care.” Unfortunately, by the time of the event, her tenant had left Butte because of the hate crime.

“It means the world to know that there are people who care,” Chessmore said at the rally. “And that’s the only way we’re going to put a stop to it. Is the fact that you all came out. You’re all helping, and I thank you.”

Cheryl Eagle of Indian People’s Action, an enrolled Blackfeet member, said she loves Butte and its friendly people. However, she told rally goers that it’s still a hard place to be brown, which makes it like most other communities. “There are seven reservations in Montana, and sometimes we are treated like we are strangers to this land,” Eagle said. “It blows my mind.”

MHRN’s McAdam, who emceed the rally, closed the event by invoking the common “Butte Strong” mantra. “Let’s make ‘Butte Strong’ mean that what we’re working for and what we want are welcoming and inclusive communities where all of us are safe,” he said.

At the rally, a collection was taken up to address the security issues at Chessmore’s home. Those attending contributed more than $420. Community members also set up an online GoFundMe campaign that raised an additional $435. Chessmore has purchased security cameras and is currently exploring other measures to take.

You can find Montana Public Radio’s coverage of the CommUnity Rally Against Hate here.