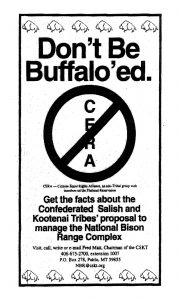 The efforts to return the National Bison Range to CSKT have spanned decades. During that time, the Tribes have had to counter misinformation by anti-Indian groups. This newspaper advertisement addressed the Citizens Equal Rights Alliance, the largest anti-Indian group in the country.

A hearing last month about the future of the National Bison Range illustrated the role that racism and anti-Indian sentiment have played in opposing efforts to return the Range to the Confederated Salish and Kootenai Tribes (CSKT). For 25 years, CSKT has sought a more just partnership with the U.S. government by having management of the Bison Range returned to the Tribes from U.S. Fish and Wildlife Services. While various steps toward that goal have happened at different points in time, the Trump Administration says a return is off the table.

CSKT is interested in re-acquiring the National Bison Range for numerous reasons. The Range is surrounded by the Flathead Reservation, and the land was taken by the federal government as part of 1908 legislation whereby the government parceled out land on reservations to non-tribal members. Essentially, this amounted to the United States government giving away the land of another sovereign nation. CSKT maintains the land was taken unconstitutionally and without the Tribes’ consent.

Ever since CSKT started its efforts supporting the return of the Bison Range and establishing a more just partnership with the U.S. government, opponents have used racist rhetoric based on derogatory stereotypes of American Indians. During 2016, CSKT took public comment on draft legislation to implement the Range’s return. The written comments received included overt racism directed at American Indians, including:

*   Jim Floyd characterized Indians as “lazy bastards” who “will just screw it [Bison Range] up” if given ownership of the Range.

*   Louie Sharp complained, “They [American Indians] exhibit no motivation to lift themselves out of poverty or ignorance.”

*   John Turcotte stated, “In my opinion the tribes have a most difficult time trying to take care of themselves. I HAVE NO FAITH IN THEM TO MANAGE THIS LAND AND THESE ANIMALS [emphasis in original].”

*   Philip Gregory declared, “This country has made it possible for all the Native People of this country to live a better life than they would have ever developed on their own…Tell the minority people who live in this country to get off their ass, get an education or trade and make a living like the rest of us have done or are doing!”

Some opponents to returning the Bison Range also repeated the common, but false, claim that American Indians don’t pay taxes. Others repeated the right-wing’s common refrain of “reverse racism,” saying they feared tribal members working at the Bison Range would be racist toward white people.

CSKT hasn’t just faced racism and bigotry from individual community members. Instead, opposition has also come from activists and entities involved in the anti-Indian movement, which seeks to abolish tribal sovereignty and erase Indian culture. One such activist, Susan Reneau, attended the hearing on the Bison Range last month. She’s been a plaintiff in litigation against tribal management of the Bison Range and has worked with well-known anti-Indian activists and groups like the Blue Goose Alliance to oppose CSKT. The Blue Goose Alliance was one group that helped provide a new way for anti-Indian activists to attack CSKT by using environmental language, instead of racism, to oppose tribal management. However, even the groups and activists that use environmental language sometimes also deploy rhetoric that taps into untrue racist stereotypes, such as that  American Indians are lazy and incompetent.

The Blue Goose Alliance, with Reneau’s leadership, claimed to work on supporting the National Wildlife Refuge System. However, the vast majority of its work for over a decade was opposing efforts by American Indian tribes to reestablish and restore areas of geographic, cultural, or historical significance. This opposition included CSKT’s role with the Bison Range, and the Council of Athabascan Tribal Government’s involvement with the Yukon Flats in Alaska. The Network was only able to find two refuge specific actions by Blue Goose that weren’t opposing tribes asserting their traditional rights. Blue Goose went so far as to oppose updates to the Indian Self-Determination Act in 2010, because of the group’s focus on undermining tribal sovereignty. 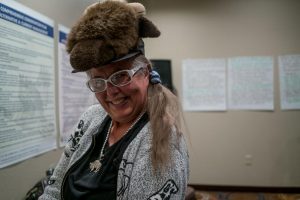 Montana Public Radio’s website featured this picture of Susan Reneau at the hearing in May 2019 about the National Bison Range.

At last month’s meeting, Reneau said she feared what returning the Bison Range might mean for the management of wildlife refuges around the country. She falsely claimed that every refuge in the National Wildlife Refuge system would “fall to some sovereign Indian government” if the Range was returned to CSKT. A tribal attorney pointed out there is no other situation on a reservation like the one involving the Bison Range.

Reneau likes to repeat environmental-oriented talking points in public. However, she doesn’t always stay on message, and her anti-Indian thoughts come through. In opposing tribal management of the Range, she once added that she didn’t support the federal government officially recognizing any other American Indian Nations. She’s referred to a leader of the anti-Indian group All Citizens Equal (ACE), which actively opposed CSKT on the Bison Range and all other tribal initiatives, as a “dear friend.” Some of her writings appeared in ACE’s newsletter.

Reneau’s right-wing history extends beyond her anti-Indian activities. Back in 2002 when she served in a leadership position for the Missoula Pachyderm Club, she invited John Trochmann, founder of the Militia of Montana and a leader of the 1990’s militia movement, to address the GOP group. Around the same time, she called the members of the Missoula City Council “traitors” and led a charge to make the councilors either recite the Pledge of Allegiance before meetings or tender their resignations. During the Obama presidency, Reneau told a talk-radio program that Obama was an “Islamic terrorist.”

While some anti-Indian groups and activists have adopted environmental-sounding rhetoric to oppose tribal management of the Bison
Range, it’s important to note that many conservation organizations support CSKT’s efforts for restoration of management of their historical bison herd. This includes national groups like the National Wildlife Federation and the Sierra Club, along with more local entities like Headwaters Montana and Hellgate Hunters and Anglers. These groups note the incredible work CSKT has done with other wildlife and land management efforts. Many of these groups also point out that returning the Range to CSKT isn’t part of right-wing efforts to sell off or privatize public lands. Instead, in this case, it’s about the federal government returning land and cultural symbols back to a sovereign nation, from which the land was taken in the first place.

Anti-Indian activists come from the right-wing end of the political spectrum, which means they are skeptical of the federal government at best, or outright hostile at worst, on most issues. The exception comes when American Indians assert their rights, at which point anti-Indian activists clamor for the federal government to have jurisdiction. This helps underscore the racism behind their agenda.

The written public comments submitted about the issue, and the press coverage of the last meeting with headlines like “Racism, Distrust Permeate Bison Range Management Debate,” help illustrate that racism is always at the heart of the most strident opposition to retutning the Bison Range to CSKT.

To read more about the history of the fight over the Bison Range, please see: