June is Pride Month, Opportunity to Remember Policies Must Include All Montanans

As we enter the month of June, which is recognized as LGBTQ+ Pride Month, the Montana Human Rights Network says it’s a perfect time to highlight that 72% of Montanans support including the LGBTQ+ community in non-discrimination policies. The fact that the Montana Legislature has ignored these wishes and refused to do so follows a national trend discussed in a recent report. 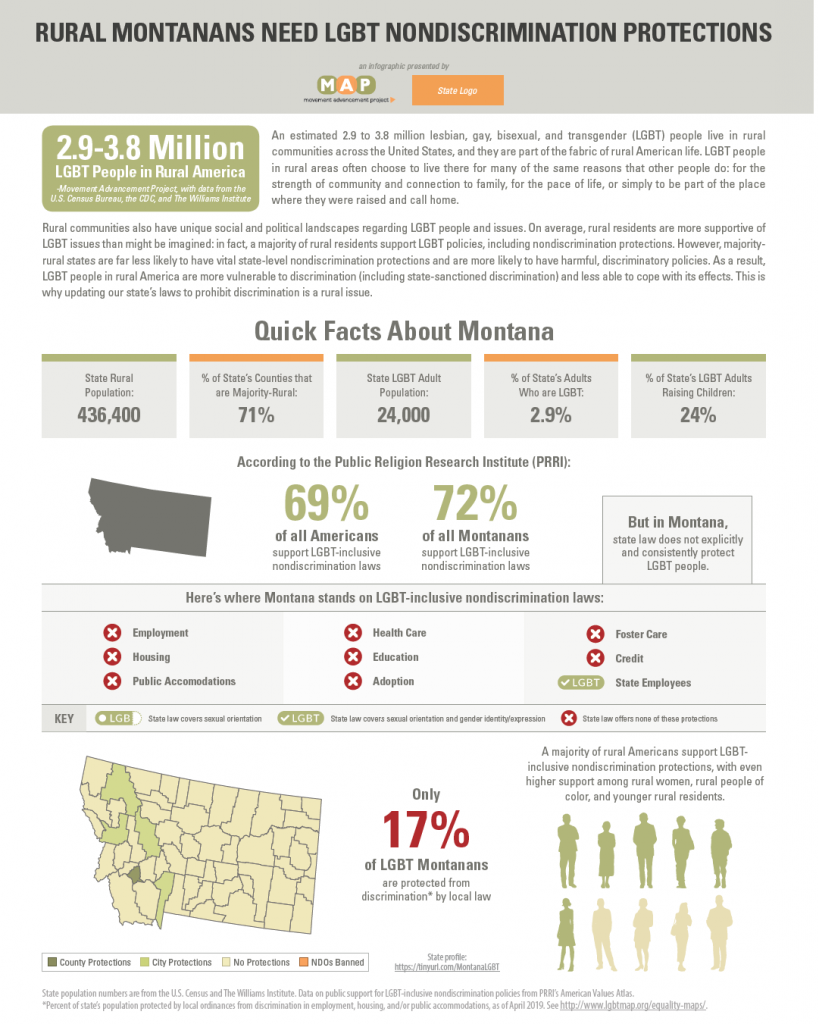 The Movement Advancement Project (MAP) recently released a report examining the realities faced by LGBTQ+ people living in rural communities across the country. The estimated 2.9 to 3.8 million LGBTQ+ folks living in rural areas face a frustrating paradox: rural residents support policies that include the LGBTQ+ community, but rural states are less likely to have statewide non-discrimination protections. Montana follows this pattern, as the Montana Legislature has refused to grant protections even though 72% of Montanans support it.

“We know that the majority of Montanans want their LGBTQ+ friends, neighbors, and family members to have legal protections from discrimination,” says Shawn Reagor of the Montana Human Rights Network. “The MAP report helps illustrate both the need and support in rural areas, including Montana, for making those changes in policy happen.”

MAP estimates that just under 3% of the state’s adult population are LGBTQ+, which translates to over 24,000 Montanans. According to research by the Public Religion Research Institute, 69% of all Americans support LGBTQ+-inclusive non-discrimination laws. The level of support in Montana is even higher at 72%. Despite that level of support, Montana lacks statewide non-discrimination protections for the LGBTQ+ community.

“We and our allies have successfully passed local non-discrimination ordinances in a few communities,” says Reagor. “However, as MAP reports, that means only 17% of LGBTQ+ Montanans have protections at the local level. Montanans demand better, and it’s time that policymakers make non-discrimination laws apply to everyone.”

The Montana Human Rights Network echoes MAP in the belief that non-discrimination protections shouldn’t depend on a person’s zip code. It’s unacceptable that LGBTQ+ folks in Montana can still experience discrimination when eating at a restaurant, trying to secure safe housing, or applying for or working at a job. Fully inclusive policies need to be instituted, so that all Montanans can fully participate in society and provide for themselves and their families.

A bill to add the LGBTQ+ community to the Montana Human Rights Act, the state’s bedrock civil rights statute, was tabled by a Republican-led committee during the 2019 Montana Legislature.

“We know Montanans support equality and want that reflected in our policies and laws,” says Reagor. “We’ll continue working toward that goal until all Montanans have the same legal protections from discrimination.”

MAP’s report, Where We Call Home: LGBT People in Rural America, can be accessed here.

MAP’s one-pager about Montana can be accessed here.