The Bundys, Imprisoned Militia Leader are Favorites of “OUR West” Group

A website originally created to be an online vehicle for the region’s most notorious anti-Indian activist continues to solidify its ideological connection to anti-government “patriots.” Recently, the website has rallied support for a militiaman currently serving more than 25 years in federal prison for conspiring to murder a judge and law enforcement officers. Instead of being an aberration, this fits closely with the direction the site, and the group behind it, have been headed.

While “This West is OUR West” started out as a website, it has evolved into a group taking action in the real world. Initially when the site launched in 2016, it served as a home for the writings and videos of Elaine Willman, the most prominent anti-Indian activist in the Pacific Northwest. The anti-Indian movement seeks to eradicate the treaty rights guaranteed to American Indians and uses tactics that amplify discrimination and bigotry towards American Indians. Willman moved to Montana a few years ago specifically to fight against the treaty rights of the Confederated Salish and Kootenai Tribes.

In July 2018, Laura Lee O’Neil registered This West is OUR West as a corporation with the State of Montana. O’Neil frequently travels with Willman, records Willman’s presentations, and posts them online. O’Neil is an avid supporter of the right-wing John Birch Society and has been an outspoken supporter of the Bundy family, which has staged notorious armed standoffs with the federal government in Nevada and Oregon. 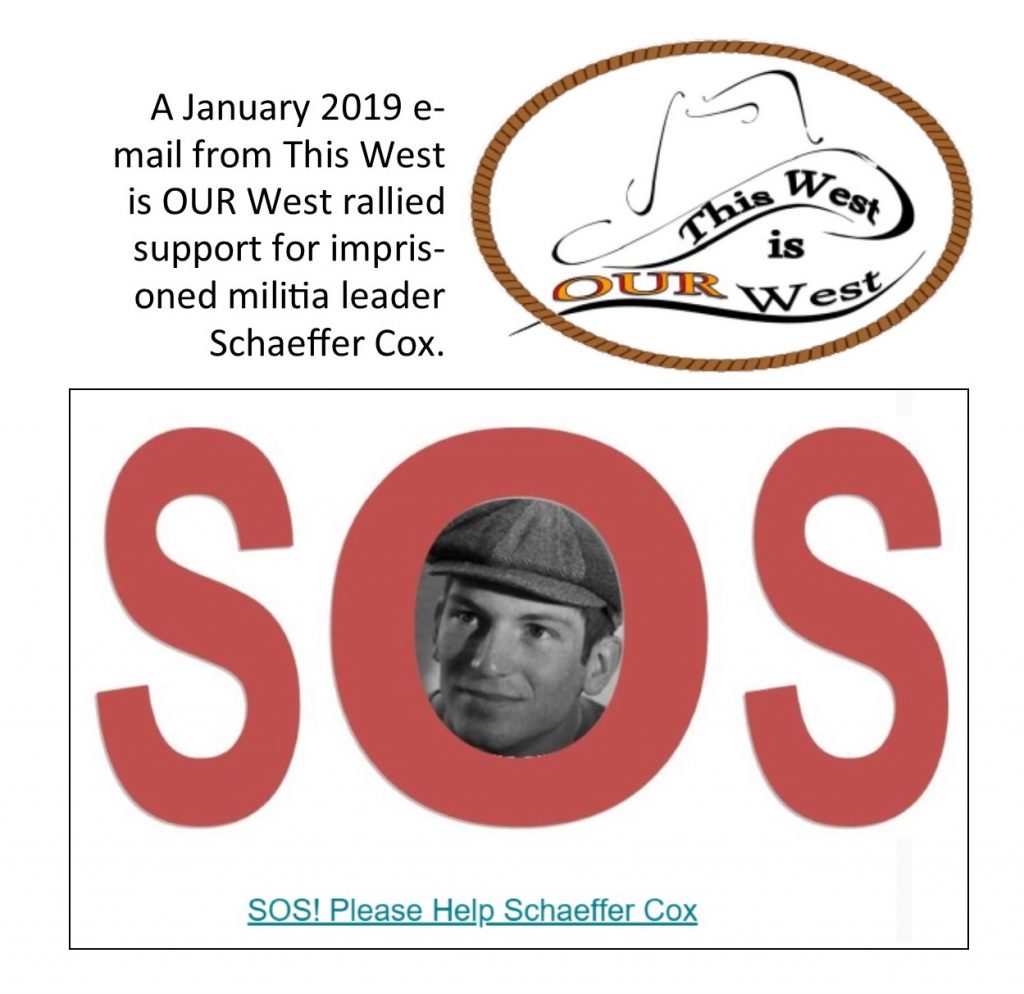 A few months after being incorporated, This West is OUR West had its big coming out party when it hosted “The New Code of the West” event in Whitefish in October 2018. The event illustrated how the group sees its ideology existing at the nexus of the anti-Indian, anti-environmental, and anti-government militia movements. The featured keynote speaker at the New Code conference was Ammon Bundy, a member of the notorious anti-government family mentioned above. He lectured attendees about his family’s false version of American history and unconstitutional sovereign citizen views, while also encouraging communities to follow the Bundy example.

The other speakers at the Code of the West weren’t any better. Attendees listened to more than eight hours of wild right-wing conspiracies by speakers claiming, among other things, that shadowy Deep State entities are working to end freedom in America; all Muslims are part of a plan to destroy Western Civilization; treaty rights can be ignored and tribal sovereignty shouldn’t exist; and Democratic electoral wins in Montana were due to voter fraud by Montana Indian Nations. The whole event should have been titled “Right-Wing Conspiracies 101.”

Imprisoned Militia Leader Called for “Blood in the Streets”

This West is OUR West featured plenty of speakers at the Code of the West who are steeped in the “patriot” movement, but its not just anti-government ideas the group supports. This West is OUR West has been circulating updates about and pleas of support for Schaeffer Cox, an Alaska militia leader currently in prison for conspiring to kill a judge and law officers.

A decade ago, Schaeffer Cox was a young, up-and-coming militia activist. He headed the Alaska Peacemakers Militia, which held firearms and survival training sessions. Cox first made a name for himself when he unsuccessfully challenged an incumbent Republican in a state legislative primary in 2008. While he didn’t win, he received about 36% of the vote.

Cox was a strong organizer and energetic speaker. He was politicized during Ron Paul’s presidential bid and was as a strong proponent of Paul’s Libertarian philosophy. He used old militia ideas and easy mainstream issues, like guns, as an entry point for recruits. Early on Cox self-affiliated as a sovereign citizen and with the militia movement, forming the Fairbanks-based Second Amendment Task Force in 2009 and the Alaska Peacemakers Militia.

Cox was routinely in trouble with the law. In March 2010, he was charged with second-degree felony assault for choking and punching his wife in front of their two-year-old son. He ended up pleading guilty to a lesser charge of reckless endangerment and received a suspended sentence. At the time, he bragged there were 80 militiamen ready to “storm the building” to protest the domestic violence charge against him.

Later that same month, he was arrested for failing to notify a Fairbanks police officer that he was carrying a concealed weapon. The incident stemmed from responding to an alert from his “Liberty Bell Network,” which notified other “patriots” if somebody felt their rights were being violated by a government official, including routine traffic stops by police. If an alert was received, “patriots” were supposed to rally to the location where the supposed abuse was happening. Cox showed up to an alert from another “patriot” in a situation involving law enforcement while he was carrying a concealed .38-caliber pistol. He pleaded not guilty to a misdemeanor charge of weapons misconduct. 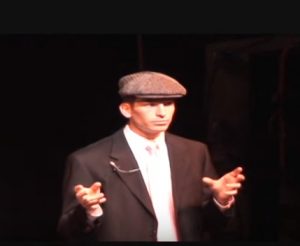 There are still videos posted online of Schaeffer Cox’s various speaking engagements in Montana, including the one from which this screenshot is taken of him at the “Liberty Convention.”

Between 2009-2010, Cox spoke multiple times in Montana. The Bitterroot Valley-based Celebrating Conservatism featured Cox at multiple events during that time period. In 2010, the group held its “Liberty Convention” on the University of Montana campus. While attendance paled compared to the predictions of organizers, those who attended glimpsed the type of action advocated by Cox that would land him in prison. He said Fairbanks was “on the edge of blood in the streets,” and that his militia could kill anyone that he believed was acting tyrannical. He said using the ballot box wasn’t working, and that change would have to come by “muzzle flash.” He said war was the only option, and victory would require people “willing to kill for freedom.”

It turned out that Cox wasn’t just engaged in hyperbolic talk. While awaiting trial for carrying a concealed weapon during his Liberty Bell response, Cox and his fellow militiamen started concocting the plan that led to his federal prison sentence.

He and his group decided that he would skip his trial on the concealed weapons charge. Knowing a warrant would be issued for his arrest if he didn’t appear, Cox developed his so-called “2-4-1” plan. If Cox was arrested, two law enforcement officers would be kidnapped. If Cox was killed, two of his targets would be killed. If Cox’s home was taken, the homes of two targets would be burned to the ground. The militia conducted surveillance and amassed an arsenal for the murderous plot. Cox also talked about how he wanted to violently overthrow the government and hang court employees, saying their bodies would look like “wind chimes of liberty.”

Cox and his cohorts were arrested in 2011. In 2012, he was convicted on nine federal charges related to firearms violations and conspiracy to kill a judge and law enforcement officers. He was sentenced to just under 26 years in federal prison.

None of Cox’s actions seem to faze This West is OUR West. The group’s website features communications from the imprisoned Cox and pleas to help with his legal defense. This West is OUR West has also devoted e-mails sent to its followers solely to Cox. In late January 2019, the group sent one with a giant graphic stating, “SOS! Please Help Schaeffer Cox.” It linked to a post saying that Cox was an “innocent man” and asking for contributions to his legal fund. A note from Cox said he had heard it was likely he could receive a pardon if he could get his story in front of President Trump.

In March 2019, This West is OUR West distributed another Cox-supporting e-mail. It linked to five separate articles portraying Cox as innocent and directing readers to Cox-approved websites for more information. One linked article featured Cox bashing the Muslims with which he is imprisoned, claiming that they are trying to kill him and all the other Christian inmates. Cox continues to think he’s fighting the good fight. He said that his actions that led to him going to prison were part of his mission to “follow Jesus through the smoke of battle.” Cox said he wouldn’t change anything that he’s done.

“This West is the WORST West”

Back in January 2018 when Cliven Bundy spoke in Paradise, MT, there was literature supporting Schaeffer Cox out on tables. There were envelopes wishing Cox a happy birthday that had his prison mailing address already printed on them. There were also business cards describing Cox as a “Christian American Political Prisoner.” 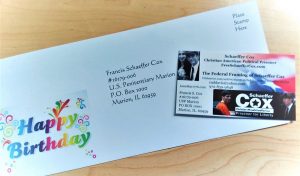 When Cliven Bundy spoke in Montana, these self-addressed envelopes wishing Schaeffer Cox a happy birthday were on tables for people to pick up, along with business cards calling Cox a “Christian American Political Prisoner.”

This appears to be how This West is OUR West views Cox. The group’s underlying ideology and worldview is clear. It celebrates members of the Bundy Family who have gone to war with the federal government. It celebrates Schaeffer Cox, an imprisoned militia leader who conspired to kill criminal justice employees. While the group continues its original purpose of attacking tribal sovereignty and Indian Tribes, its ideological doctrine clearly includes avid support of the “patriot” movement.

This West is OUR West actively seeks opportunities for the anti-Indian, anti-environmental, and militia movements to work together. This means that it’s pushing a dangerous ideology that only divides communities. This West is OUR West traffics in right-wing extremism and paranoia that preys on and amplifies the worst characteristics of our communities. By elevating criminal activists that go so far as to plot the killing of criminal justice personnel, This West is OUR West should, not only be of concern to those of us who care about human rights, but also to Montana law enforcement, which needs to be on alert about this extremist group.

To push back against efforts by the group, community members must seek out allies across issue areas and come together to condemn these dangerous ideologies while centering the real values of the area. The response organized against The New Code of the West conference offers a good template.