The Montana Human Rights Network has teamed up with conservation allies over the past year for public presentations examining the threat to human rights and the environment by extremists. These events have covered the history of how extremists targeting public lands connect to other right-wing movements. They have also addressed the current threats posed by anti-public lands extremists and how community members can support each other when it comes to both conservation and human rights.

The current anti-government “patriot” movement began back in the 1990s and featured armed militias popping up around Montana and the rest of the country. Many of the pioneering leaders of the militia movement cut their teeth in the white nationalist arena but wanted a way to be more appealing to the mainstream. They did this by playing up anti-government sentiment and one-world government conspiracy theories (without the blatant anti-Semitism of the white nationalist versions) and focusing on issues like guns and taxes (instead of race). In western states, “patriots” have long targeted federal land-use agencies.

As these ideas have made their way into the political mainstream, the Network has documented and opposed efforts by state legislators to codify these ideologies. Not surprisingly, the lawmakers supporting militia and “patriot” notions also often support efforts to sell off public lands. However, it goes beyond just these two issues. Lawmakers, and many community activists, who traffic in these ideas also generally oppose LGBTQ+ equality, public schools, tribal sovereignty, land-use planning, actions to address climate change, and a whole host of civil rights issues. In other words, when the Network and conservation groups look at their opponents, it’s largely the same people.

The Network and our conservation allies have long been concerned about the crossover between the “patriot” and anti-environmental movements. However, the urgency to work together increased as the Bundy Family gained infamous notoriety by engaging in armed standoffs with the federal government in both Nevada and Oregon. The Bundy legacy continues to embolden anti-public land extremists, especially since a federal judge dismissed the charges against the Bundys for the Nevada standoff and a jury acquitted the members of the family who led the armed Oregon occupation of a wildlife refuge. Troublingly, Montana is on the Bundys’ radar, as members of the family spoke at three separate events in Montana during 2018. 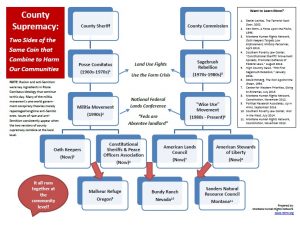 This infographic shows the evolution of the two versions of county supremacy. It also shows current groups that use these beliefs and provides examples of how the versions combine at the community level. Click the image to view it as a PDF.

While the issue of public lands may have gained widespread attention over the past few years, the efforts toward privatization and attacks on federal land managers, personified by the Bundy Family, have a long history of and broader connection to extremism that impacts us all. While those protesting land-use regulations and those rambling about an invasion by the New World Order can seem very different, there are ideological beliefs that they share. A major piece of the glue that binds these two movements together is a belief in county supremacy.

The anti-environmental “wise use” and “patriot” movements both have versions of county supremacy. Wise use focuses on the county commission, while the “patriot” version is obsessed with the county sheriff.

Started in the 1980s, the wise use movement was the successful effort to funnel money from extractive industry to Astro-turf groups to oppose the growing environmental movement’s success and push the idea that communities wanted to open public lands to development. A main tactic was to frame loggers, miners, and ranchers as “true environmentalists,” because they worked the land, in addition to other strategies to chip away at the conservation movement’s credibility. Propping up these stakeholders created legitimate voices in opposition to federal regulations like the Clean Air, Clean Water, and Endangered Species Acts. It also generally undercut the value of federal regulations to local communities.

While it started out with this fake grassroots structure, over time the industry money shifted as the Republican Party at all levels incorporated more and more of the wise use agenda. The beliefs of wise use became planks in GOP platforms and talking points for candidates. While the industry money shifted into more political realms, there were activists at the community level who were recruited into and politically educated by the wise use movement. These activists continued their efforts without the corporate funding, which resulted in the wise use movement having a more legitimate grassroots presence than when it was founded.

At the community level, wise use activists frequently champion a version of county supremacy that focuses on the county commission. In their view, the county commission should have ultimate jurisdiction over all land within a county’s borders. The story normally goes that the county commission could then start, or increase, the amount of logging and mining that happens on public lands. This is generally presented as a silver bullet to jumpstart local economies. This version of county supremacy has been promoted under many names over the years, including county home rule, appeals to “local control,” and “coordination.”  Despite the claims of wise use activists, these ideas lack a legal foundation.

Meanwhile, the “patriot” version of county supremacy focuses on the county sheriff. This view of the sheriff as the highest legitimate law officer traces back through the 1990’s militia movement to the Posse Comitatus of the 1970s and 1980s. Latin for “power of the county,” the Posse Comitatus combined racism, anti-Semitism, and paramilitary organizing. The Posse believed citizens weren’t subject to state or federal authorities, and that the county sheriff was the highest legitimate law officer. The group swore to use force to oppose any perceived encroachment by federal institutions and expected sheriffs to “protect” county residents from agencies seeking to enforce federal law and regulations, especially, but not limited to, the areas of taxes and firearm regulation.

At the 20,000-foot level, some lines of distinction between these two versions of county supremacy can be drawn. However, frequently at the community level, activists promote both versions at the same time, which helps ignite anti-government sentiment in local communities.  There are many Montana examples of this crossover between wise use and “patriots.”

Back in the 1980s, a pioneering wise use group, the National Federal Lands Conference, promoted militia groups as a great way to defend property rights. Throughout the 1990s, Montanans for Multiple Use (MFMU) and the Militia of Montana circulated information from each other on their e-mail lists and in their newsletters. In fact, MFMU listed the Militia of Montana as one of its supporters in newsletters. During the 2011 Montana Legislature, a state senator carried bills to codify both the wise use and “patriot” versions of county supremacy. John Trochmann, founder of the Militia of Montana, helped form the Sanders Natural Resource Council (SNRC), which pushed the Sanders County Commission to exert its supposed powers under the myth of county supremacy. SNRC helped launch the political career of state Sen. Jennifer Fielder (R-Thompson Falls), a champion of selling off private lands and the head of the American Lands Council. 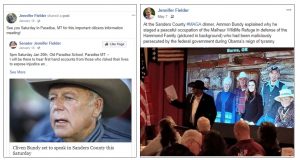 State Sen. Jennifer Fielder (R-Thompson Falls) helped promote the appearances by members of the Bundy Family in Montana during 2018.

In other words, the Network has been concerned for decades about how the crossover between the “patriot” and wise use movement negatively impact our communities. The Bundy Family and its armed standoffs with federal agencies are dangerous examples and help illustrate the point. In Paradise, MT, last year, the Bundys claimed that the county sheriff should have stepped in and protected them from federal law enforcement, along with discussing the importance of county-level government. When he spoke in Whitefish last October, Ammon Bundy talked about how, during the Oregon standoff, he and his fellow militia members taught visiting county commissioners from around the region about what he euphemistically called “proper jurisdiction.” This combination of the two versions of county supremacy form part of the ideology driving the Bundy Family.

For the events it has held with conservation allies, the Network put together this infographic that shows the evolution of the two versions of county supremacy. It also shows current groups that use these beliefs and provides examples of how the versions combine at the community level. County supremacy has become part of a broader mythology pushed by the right wing, and it has been repeated to the point that, too frequently, it is accepted as true. The Network looks forward to continuing to work with conservation allies to push back against those promoting this dangerous ideology.