One of the leading alt-right groups in the country is employing the age-old strategy of changing its name to try and free itself of negative political baggage and reinvent itself as something that can be sold as more mainstream. Identity Evropa announced in March that it was now going to be called the “American Identity Movement.”

Launched in 2016, Identity Evropa (IE) personifies the alt-right’s efforts to rebrand white nationalism for the social media era. The group has been described as the “fashionable face of white nationalism” that seeks to present a “clean cut, successful image of white manhood.” IE attempts to reframe white nationalism to sound positive and uses social media to push its message. It likes to claim it is raising white racial consciousness and building a shared racial identity with the goal of turning America into a white ethnostate. To that end, IE says it is a group for “European-Americans seeking to restore America.” Underlying the groups’ anti-Semitism, Jewish people are not allowed to be IE members.

The group’s target demographic is white, college-aged men, and it is notorious for doing literature drops on campus that it then promotes on social media. This is such a major tactic that IE has called its efforts “Project Siege,” stating the goal is to get its literature on as many campuses as possible across the country. Campuses in Billings, Bozeman, Helena, and Missoula have been targeted. IE targets colleges, because it claims that is where white people are taught to feel racial guilt, accept diversity, and support multi-culturalism. For IE, all of these are detrimental to white people. IE views campuses as where the fight to save the white race must be waged.

IE understands that the reach of its literature drops and small, flash-mob style rallies is small. That’s where social media becomes important. The group uses pictures of literature drops and videos of rallies to create content to spread on social media. The goal is to take up space with its literature, images, and slogans with the hope that, through repetition, the group can mainstream its white nationalist and anti-Semitic beliefs.

In order to make its offensive ideology more palatable, IE downplays its anti-Semitism, and its literature generally contains slogans and/or black-and-white photos of famous sculptures from ancient white civilizations. Slogans used include “Our destiny is ours” and “Our future belongs to us,” which frames white nationalism as a positive strategy to “save” the white race.

At the same time, IE attacks the very ideas of racism, diversity, and equality. Frequently, its activists claim it is really white people who face discrimination and are the most common victims of racist attacks. This idea is often repeated on social media, sometimes accompanied by #whitegenocide. Overall, IE’s goal is trying to make white nationalism look positive and provide a pseudo-intellectual basis for young, white, college men to get on board.

IE has exemplified the alt-right’s mix of pairing social media and real-world activism. The group’s founder, Nathan Damigo, cemented the group’s reputation for brawling in the streets with counter protestors. An Iraq War veteran who served prison time for assaulting a cab driver he thought was Iraqi, Damigo left IE after the infamous 2017 Charlottesville rally.

Eli Mosley took over leadership when Damigo left. He helped organize the Charlottesville rally, and some in the alt-right blamed him for the violence that broke out, which included an alt-right activist fatally running down a counter protestor in a car. Mosley’s influence was easy to see at the rally. One example is that a common IE slogan is, “You will not replace us.” At Charlottesville, white nationalists marched with tiki torches, chanting, “Jews will not replace us.”

Mosley bragged on podcasts about killing Muslims, whom he called “muds,” while being deployed in the Middle East. He also discussed how he worked in human resources and loved spending his days firing Hispanic and African American employees. His stories about being deployed with the military ultimately sunk him. The New York Times investigated his story and discovered Mosley never left the country while enlisted.  After leading IE for only three months, he left. He announced plans to form a new group called Operation Homeland with Montana’s Richard Spencer, with whom he had worked closely. However, this new group has not amounted to much.

IE announced its change to the American Identity Movement following the release of thousands of pages of internal online communications. These documents included information that revealed Jay Harrison, a Montana Student University student and a ROTC cadet, was an IE member. The release of the internal communications provided the group’s current leader, Patrick Casey, an opportunity to change IE’s name and try to leave behind the negative perceptions of the group. This also aided his efforts to recruit out of the mainstream conservative movement, including the GOP.

Patrick Casey took over IE leadership in November 2017. He began trying to create distance between IE and the rest of the alt-right. Instead of partnering with other white nationalist groups, IE held events by itself. A major reason for this was Casey trying to disassociate IE from the Charlottesville rally, even though IE leadership was integral to its organizing.

Casey has targeted the GOP, saying he wants IE to take over as much of the Republican Party as it can. With all the negative political baggage IE had accumulated, Casey’s decision to change the group’s name to the American Identity Movement makes sense. It allows the group a fresh start, while also tapping into an idea crafted in Europe to help white nationalism infiltrate the mainstream.

IE has long marketed itself as the American outpost of European Identitarianism. Started by a couple of racist skinheads as a youth movement, Identitarianism was meant to protect European (read “white”) identity against the perceived threats of immigration and Islam. The idea was to frame racism and white nationalism in a more positive light by talking about it in terms of White Christians vs. Middle Eastern Muslims. Promoting xenophobia and white nationalism was hidden behind rhetoric about youth fighting for their countries. In Europe, white nationalists and anti-Semites must develop such vehicles to discuss their ideologies. These countries don’t have something like the First Amendment, and many of them have laws against promoting anti-Semitism and racism, which trace back to a response to World War II.

Promoting Identitarianism has always been part of IE, but its name change doubles down on this approach. Using an approach that is specifically designed to make white nationalism more coded and palatable fits with Patrick Casey’s goals for IE. 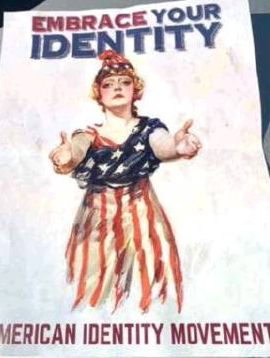 Montanans need to be aware of IE/American Identity Movement and its tactics, because communities, especially campuses, have been targeted. Over the last two years, communities including Billings, Bozeman, Helena, Kalispell, Laurel, Missoula, Red Lodge and Whitefish have been targeted by IE/American Identity Movement literature. Additionally, it has a campaign called “Defend the Rockies,” which seeks to make the Rocky Mountain West an Aryan homeland.

The Network believes there is a small cell of IE/American Identity Movement supporters based out of the Billings area, along with a few activists in other places around the state. Not coincidentally, the rate of these literature drops decreased following the media’s exposure of the MSU student in Bozeman. However, Billings just recently had another round of literature dropped for IE/American Identity Movement, and Laurel was hit back in March.

Should you find IE/American Identity Movement literature, or other racist and/or anti-Semitic material, in your community, please let the Network know by filing an online report with us here. Network staff has a presentation it has given to colleges and communities about IE. If you’d like to bring that to your community, email network@mhrn.org.