Update: Shortly after this was posted, Andrew Anglin failed to show for a deposition, which effectively ended his defense in the case. You can read more about these developments in this article. The Montana Human Rights Network will no longer have to fight the requests made in Anglin’s subpoena.

The Neo-Nazi white nationalist who mobilized an online troll storm that terrorized Whitefish’s Jewish community in 2016 is facing litigation due to the terror it caused to a Jewish realtor and her family. Andrew Anglin is using the litigation process in that lawsuit to try and make the Montana Human Rights Network turn over private information about both its supporters and interactions with other organizations. 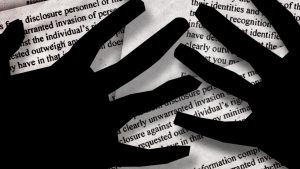 “Although our organization is not even a party to the lawsuit, Andrew Anglin is using it as a fishing expedition to try to make us hand over sensitive material not related to the case,” said Rachel Carroll Rivas, Co-Director for the Montana Human Rights Network. “Anglin has targeted us in the past, and the information he is trying to obtain could be used to harass and threaten people based on their association with the Human Rights Network. We’re continuing to fight this overreaching and overzealous request.”

Born and raised in Ohio, Andrew Anglin glorifies Hitler, once saying he routinely asks himself, “What would Hitler do?” He’s encouraged his followers to prepare for a coming race war and circulated social media memes with slogans like “Gas the Kikes, race war now.” In fact, his writings have urged his followers to prepare for war with a long list of people he views as enemies – Jews, people of color, Muslims, women, liberals, journalists, and basically anyone who disagrees with him.

Anglin skyrocketed to fame in the white nationalist movement due to his website, “The Daily Stormer.” Launched in 2013, the name references an anti-Semitic newspaper published by a German Nazi during World War II. The Daily Stormer traffics in racism, anti-Semitism, misogyny, in addition to Neo-Nazism. A couple of years ago, The Daily Stormer was the leading white nationalist site online. It has many aggressive followers that Anglin and his website frequently rally to participate in “troll storms,” which perpetrate online harassment against targeted people and groups. His impact isn’t limited to social media. Multiple white nationalists who have murdered people were avid fans of the site.

In December 2016, Anglin unleashed a troll storm on Whitefish by publishing personal contact information and details about Jewish members of the community. Other targets included businesses, human rights groups, and city council members. Anglin told his trolls to “hit ‘em up.” The central target, however, was local Jewish realtor Tanya Gersh. Her family received over 700 hundred harassing and threatening phone calls, text messages, and emails. One caller said white nationalists could keep the Holocaust alive by burying Gersh and her family. Anglin circulated images of Gersh and her son at the gates of Auschwitz and another of her son being crushed by a tank.

As the troll storm waged in Whitefish, Anglin announced his plan to bus in 200 armed skinheads for a march for James Earl Ray Day, celebrating the man who assassinated Dr. Martin Luther King. While the armed march never materialized, the impacts of the threats and harassment were very real.

During the troll storm, Anglin published about 30 articles encouraging his followers to harass his various targets in the community. These targets 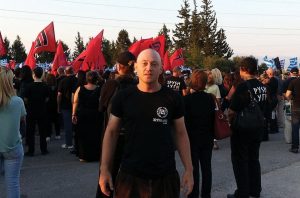 included the Human Rights Network and its local affiliate Love Lives Here, which Anglin referred to as “the Jew terrorist group.” Network staff received threats, including statements that they were better off as human fertilizer. Anglin used his platform to disparage and target individuals identified with Love Lives Here, including posting personal phone numbers, e-mail addresses, and Twitter handles.

This was not the first time that the Network and its supporters had faced threats and harassment from white nationalists, which is why we’re fighting so hard not to comply with the requests made in Anglin’s subpoena. Anglin seeks material that could reveal information putting employees, volunteers, and other supporters at risk, and his conduct confirms the danger, as he has previously targeted the Network and people associated with it.

In April 2017, Tanya Gersh, represented by the Southern Poverty Law Center and John Morrison, sued Anglin for invasion of privacy, intentional infliction of emotional distress, and violation of a Montana anti-intimidation statute. Anglin has claimed to be living outside the country and is refusing to appear for court proceedings, saying he fears facing consequences for his actions.

Andres Haladay of Drake Law Firm in Helena is the attorney representing the Montana Human Rights Network. Haladay said, “It’s ironic that Mr. Anglin has tried to use this lawsuit to force the Montana Human Rights Network to turn over membership information, exposing Jewish, brown, black, and LGBTQ people to potential harassment, while he remains in hiding and refuses to comply with the Court’s Order.”

Furthermore, the Network has internal working documents for it and its allies that discuss strategies for achieving human rights victories and stopping anti-Semitism, homophobia, white nationalism, and other anti-democratic activities. These documents are at risk of disclosure based on Anglin’s subpoena requests. The Network argues that having to turn these types of documents over would hinder its ability to fulfill its mission, along with providing a roadmap for white nationalists to counter human rights efforts and more successfully promote their hateful ideology.

“We stand up to Nazis when they terrorize local communities, and we’ll stand up to Nazis in court if we need to,” said Rivas. “We don’t have a legal budget, and we’ll need community support, but we will not make it easy for Anglin to obtain information that could, once again, help him and his racist and anti-Semitic thugs terrorize and harass those they hate.”

The Network is currently scheduled to appear at a hearing before the judge in Gersh v. Anglin on May 15, 2019, to make its case as to why it should not be compelled to turn over the records Anglin seeks.

Help Us Fight Back, Contribute Today By Clicking Here