We’ve warned about the militia movement for over two decades. From the Montana Freemen, Militia of Montana, and Project 7, we know their dangerous behavior well.

Recently, the Montana ACLU filed a federal lawsuit against private companies that use armed bounty hunters to capture people who jump bail. The lawsuit stems from an incident where bounty hunters wearing bullet-proof vests and armed with semi-automatic assault rifles broke into a family’s home and dragged a man out of bed at gunpoint.

The armed bounty hunters were part of the Montana Civil Assistance Group. The Human Rights Network looked into the group and its members back when the incident came to light in April 2018. The way the bounty hunters were armed, their overly aggressive actions, and their willingness to claim they were acting as quasi-law enforcement raised the Network’s interest. After all, we’ve seen militia and other so-called “patriot” groups display similar behavior. 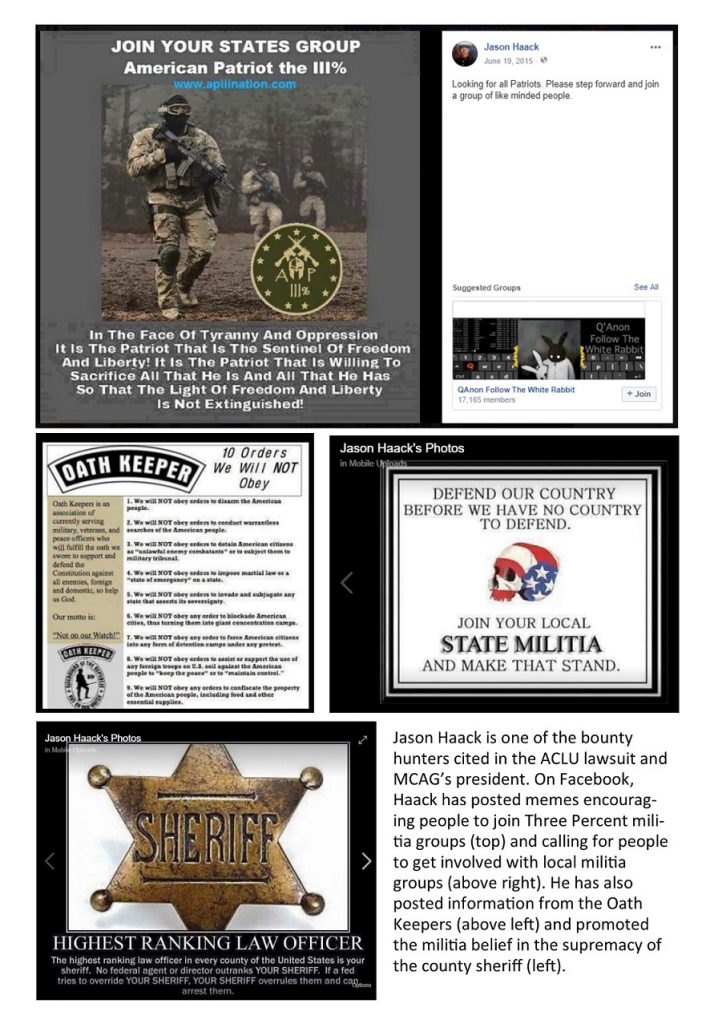 “In looking at the Montana Civil Assistance Group’s website, they really struck me as playing a game similar to that of the militia-based Oath Keepers,” said Travis McAdam, the Network’s Research Director. “They appeared to be a militia group trying really hard not to call themselves a militia group.”

Finding groups playing this game isn’t difficult. Following the Oklahoma City bombing, which was perpetrated by a militia supporter, anti-government groups have tried to stay away from calling themselves a “militia” in public settings.

The Montana Civil Assistance Group (MCAG) recycles many common themes of the militia movement. Its website claims it will be “the last line of defense against any threat,” whether “foreign or domestic,” and that it is dedicated to the “preservation of American liberties provided under the protection of the Constitution….”

Incredibly similar to 1990’s militia groups, MCAG provides survivalist training for all members. The group also encourages all new recruits to have AR-15 semi-automatic assault rifles. MCAG states it wants to be “a light in the darkness of this ever-present attack on the fundamentals of faith and goodwill that is plaguing our entire nation.”

MCAG’s website goes out of its way to claim the group isn’t a militia, specifically stating it numerous times. However, a quick search of social media accounts for members of the group confirmed the Network’s suspicions by revealing the ideological motivations for the group.

A prolific example is Jason Haack, one of the bounty hunters cited in the ACLU lawsuit and MCAG’s president. On Facebook, Haack has posted memes encouraging people to join Three Percent militia groups and calling for people to get involved with local militia groups. He has also posted information from the Oath Keepers and promoted the militia belief in the supremacy of the county sheriff. Haack even used the “Montana Militia” Facebook group to try and recruit new MCAG members. Other MCAG members display similar affinities. Their social media accounts feature promotion of the Three Percenters and participation in Facebook groups like the Montana Militia.

The ideological disposition of the group is clear, and it trends much more towards the Militia of Montana than benign civic organization. Following the model of the Oath Keepers, MCAG is trying to dress up so-called “patriot” ideas in a more respectable form.