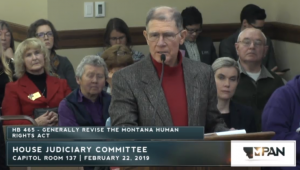 Harris Himes, pastor for Big Sky Christian Center in Hamilton, testified against HB 465. Himes is a well-known Religious Right activist who has frequently testified against LGBTQ+ equality over the years. He often portrays himself as an example of biblical authority and Christian piety. However, back in 2013, Himes was convicted on felony securities fraud charges. He served 90 days in jail as part of a 10-year suspended sentence.

For the past 20 years, MHRN has led the efforts for LGBTQ+ equality in Montana. Working at both the statewide and local levels, we have helped pass local nondiscrimination ordinances in places like Helena and Bozeman, altered state administrative rules when it comes to changing gender markers on birth certificates, and pushed for statewide protections for the LGBTQ+ community.

Just like we have for the past 10 sessions, MHRN entered the 2019 Montana Legislature with plans to add LGBTQ+ protections to state law. Working with a diverse coalition of partners, MHRN supported a bill that would add sexual orientation, gender identity, and gender expression to the Montana Human Rights Act, the state’s bedrock civil rights law that prohibits discrimination in areas such as housing opportunities and the workplace.

We were proud to lead over 30 individuals and partner organizations, such as the ACLU of Montana and Montana Coalition Against Domestic and Sexual Violence, as they shared personal stories and offered testimony to the Montana House Judiciary Committee on why these protections are so significant.

One of these courageous people was Kathleen O’Donnell, who told the Judiciary Committee:

“The thing I love most about Montana is that people take care of people.  There’s no hesitation to hold a door, to offer a smile, to wave at a passing vehicle.  We are human beings, worthy of freedom and protection in these basic situations.”

Adding to that passion was Rep. Kim Abbott (D-Helena), sponsor of HB 465. When not serving during legislative sessions, Abbott is MHRN’s Co-Director. Speaking to the bill’s necessity, Rep. Abbott detailed the importance of the bill and Montana’s need to “make things equal across the state, protect people, and treat people fairly.”

As usual, the Montana Family Foundation led the opposition to these needed protections. Hiding behind the guise of religious liberty, opponents once again showed their intolerance towards the LGBTQ+ community. Leading those efforts was Rick Vaught, the chair of Christian Education Association of Montana. Aiming his attacks at those activists in the room, Vaught claimed that:

“…militant members of the homosexual and gender-blender community [want] to create a vehicle to use the draconian coercive power of government to target, attack, and destroy people of conscience and character… who sustain the moral fabric of America.”

Despite the passionate testimony given by HB 465 supporters, the House Judiciary Committee tabled the bill on an 8-11 party-line vote. Regardless of the outcome, we are proud to stand with the entire LGBTQ+ community to make sure that all people have access to the protections they need to take care of themselves and their families, and it is clear that there is more work to do so that we have a friendly legislature that is willing to protect the rights of the LGBTQ+ community.

This means identifying and recruiting LGBTQ+ Montanans to run for our state legislature. Over the next election cycle, MHRN will increase our capacity for electoral work through our Equality Montana project. We are excited to get the foundation laid for this work, so make sure you look for our updates as we progress on this project!