“A good plan, violently executed now, is better than a perfect plan next week.” — General Patton

Are you ready to take on the tyranny from Washington? We have a plan to take back America and you are invited to join us across America. Join a patriot group today!

The Montana activist quoted above has special access to the 2019 Montana Legislature. Since what can easily be referred to as “Militia Media” was granted the same access as reputable news outlets, Tim Ravndal is wandering the Capitol halls with a press pass and posting stories on the Redoubt News website. 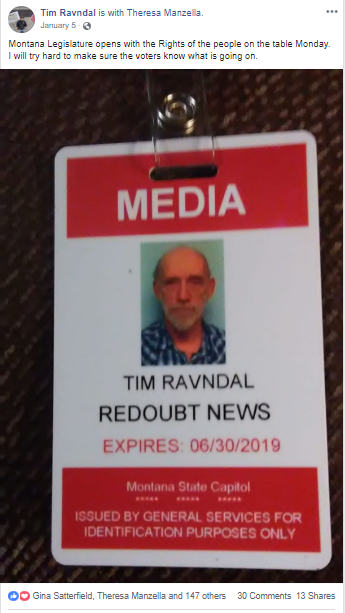 Tim Ravndal posted this photo of his press pass on Facebook.

The idea known as “Redoubt” comes directly from the anti-government “patriot” movement. Coined in 2011 by a former U.S. Army intelligence officer and self-described religious separatist, “American Redoubt” refers to making Idaho, Montana, Wyoming, and the eastern parts of Washington and Oregon a “safe haven” outpost for militia members and other anti-government activists. This geographic area, the idea goes, will be a bastion of religious conservatism able to withstand the upcoming collapse of society due to attacks by liberals and the government. This conspiracy-based view of the world featuring inevitable civil war followed by a collapse of civilization as we know it is a hallmark of the anti-government movement. Redoubt News bills itself as the news source for American Redoubt.

Much of Ravndal’s early activism in the state was countering the conservation movement. As a trapper himself, Ravndal actively opposed Wilderness efforts that were otherwise seen as centrist and coalitions between conservation groups, hikers, and the logging industry. Ravndal even went so far as to scream and point his finger at U.S. Senator Jon Tester (D-MT) at a public meeting in Dillon. Now, because of his press credentials, Ravndal shares the floor with legislators, a group of public servants he has previously shown disrespectable behavior toward.

For its inaugural run at the Montana Legislature, Redoubt News chose Ravndal, a “patriot” who seems like he has never found an anti-government group or idea to which he won’t subscribe. He is best known for being kicked out of the Big Sky Tea Party Association in 2010 for anti-gay comments. During an online exchange about the gruesome anti-gay murder of Matthew Shepard in Wyoming, Ravndal asked how he could obtain an instruction manual to deal with the LGBTQ+ community the way Wyoming did.

After being kicked out of one Tea Party, he started his own, which he called the Lewis and Clark Conservative Tea Party. With that group, he staged an armed rally on Capitol grounds in 2011. Ravndal encouraged followers to “grab your favorite weapon and…send a very, very, very loud message to our legislators.”

Ravndal said the armed rally was a follow up to a similar one held in 2010 that featured Eric Kiesche, the founder of an anti-government group called The Order of Constitution Defenders.  At the 2010 event, Kiesche suggested attendees get rid of their Social Security Numbers, and his group offered guidance on how to evade income taxes and “rid yourself of all licenses (government issued permission slips)….” These ideas are fundamental to the ideology of anti-government “sovereign citizens.” In both statewide and local settings, Ravndal has represented Kiesche’s Order of Constitution Defenders. This included at a statewide Tea Party event in 2011, where he was pictured wearing a vest with the group’s logo and name while talking to state Rep. Derek Skees (R-Kalispell). 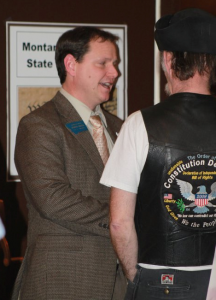 This photo, posted online in a discussion about a statewide Tea Party Conference, shows Tim Ravndal speaking to Rep. Derek Skees while wearing an Order of Constitution Defenders vest.

Ravndal has also posted notices on various social media platforms encouraging “patriots” to support the anti-government Oath Keepers when the group showed up and rallied against federal agencies in the small Montana communities of Lincoln and Basin. In 2018, he announced on Facebook that he was vice chair of the Constitution Party of Montana, a group the combines many tenets of the militia movement with ultra-conservative Christian Reconstructionism. He’s also participated in events denigrating Muslims, refugees, and conservation efforts. In other words, Ravndal is a well-rounded right-wing extremist.

Ravndal started writing for Redoubt News in mid-2018. Ravndal gleefully reported onsite from the various events President Donald Trump and his emissaries held in Montana in hopes of unseating Senator Tester. Ravndal also posted an interview he did with anti-Indian activist Elaine Willman at the 2018 Red Pill Expo, which are annual right-wing conspiracy fests. In a video series he posted about Child Protective Services, Ravndal interviewed Gina Satterfield, a rabid anti-Muslim activist, during which she said the state agency was engaged in human trafficking.

Ravndal isn’t the only Montana anti-government activist to post articles and videos on Redoubt News. Franklin Shook, who goes by the name “Elias Alias” and has led the Montana chapter of Oath Keepers, also contributes content to the website. Shook has posted multiple articles and links to Redoubt in the last year glorifying LaVoy Finicum. Finicum, a leader of the 2016 standoff between Bundy Family members/supporters and federal agencies in Oregon, was fatally shot when he reached for a firearm after refusing to stop at a police roadblock. His death has become a rallying cry for “patriots.” Shook also posted interviews he conducted with anti-government, anti-Indian, and anti-environmental speakers at a conference featuring Ammon Bundy that took place in Montana in October 2018. Shook gushed that Bundy was a “giant of a man” who is “smoothly confident in his vision.”

Redoubt at the Montana Legislature

Redoubt characterizes its articles as news and not as opinion, but stories include a clear bias with the opinions of the writer in nearly every sentence.  Given his anti-government history and support of right-wing causes, it’s not too surprising what Ravndal has zeroed in on during the legislative session. His coverage has included: