One Click Away from Hate Panel Offers Background, Solutions

Representatives from the Montana Wildlife Federation and the Montana Human Rights Network will participate in a panel titled One Click Away from Hate: How Anti-Public Lands Extremists Are Worse Than You Think. The event, sponsored by the Southwestern Wildlands Chapter of the Montana Wilderness Association, will be held on Wednesday, March 13, 2019, at the Butte Archives (17 West Quartz Street) at 6:00 p.m.

Over the past few years, the issue of keeping public lands in public hands has become a common refrain from both community members and public officials. Since polls show broad support for public lands, why do there continue to be efforts to erode these shared spaces? Because it’s about more than access and gated roads. Instead, it’s part of a broader extremist ideology seeking to topple the inclusive democracy we support in the United States. 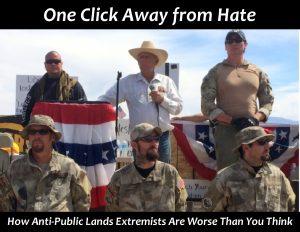 One Click Away from Hate comes on the heels of members of the notorious Bundy Family speaking in Montana on three separate occasions during 2018, the most recent of which was Ammon Bundy addressing an anti-government conference last fall. The Bundy Family gained infamous notoriety by engaging in armed standoffs with the federal government in both Nevada and Oregon.

The Bundy legacy continues to embolden anti-public land extremists. This is especially the case following a federal judge dismissing the charges against the Bundys for the Nevada standoff, and a jury acquitting the members of the family who led the armed Oregon occupation of a wildlife refuge. While the issue of public lands may have gained widespread attention over the past few years, the efforts toward privatization and attacks on federal land managers, personified by the Bundy Family, have a long history of a broader connection to extremism that impacts us all.

The fate of public lands isn’t settled. Instead, there are efforts across the country, and in Montana, to privatize and sell off public lands. A hardline strain of this movement believes that government agencies lack the authority to manage public lands. They also believe the government shouldn’t be able to enforce civil rights or provide essential services like public schools and community health clinics.

The One Click Away from Hate panelists include Rachel Carroll Rivas and Travis McAdam of the Montana Human Rights Network, along with Dave Chadwick of the Montana Wildlife Federation. The panelists will examine the history of the extremists targeting public lands and their connections to other right-wing movements; talk about the current threats posed by anti-public lands extremists; and discuss how community members can support each other when it comes to both conservation and human rights.

The following are short bios for the panelists:

If you’re interested in bringing this panel to your community, please email network@mhrn.org.