The Spokesman Review recently reported that white nationalist Scott Rhodes had moved to Libby from Sandpoint, ID. His move from northern Idaho to northwestern Montana follows a historical trend. While Aryan Nations existed near Hayden Lake, ID, the Montana Human Rights Network frequently noted hardcore racists leaving the compound and moving to small towns across the border in Montana. 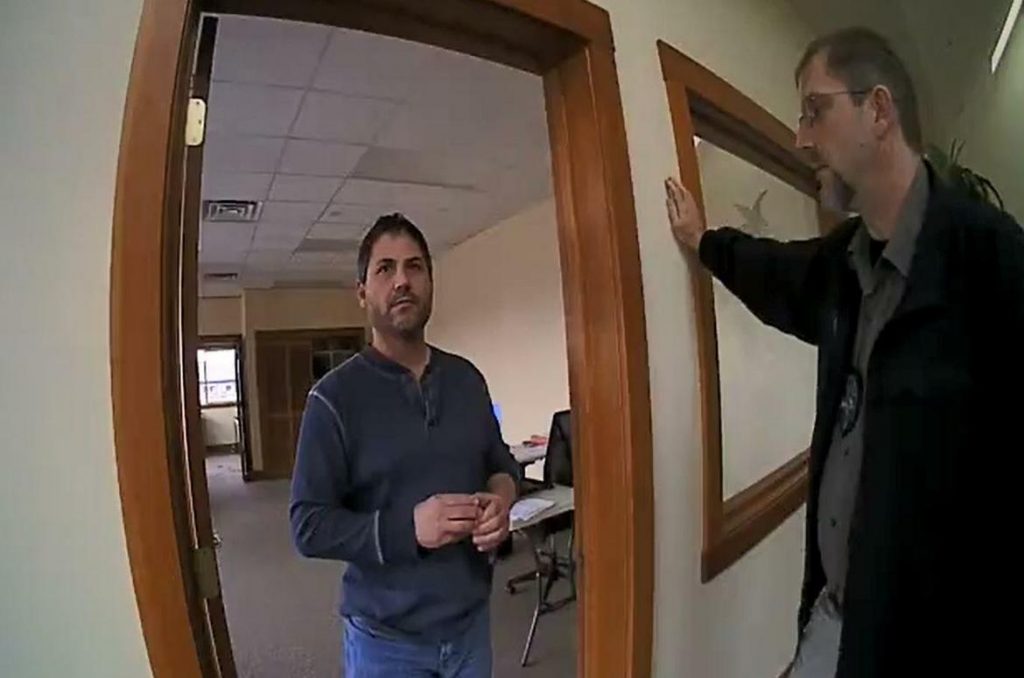 This photo, featured frequently in regional newspapers, features Scott Rhodes (left) speaking with Sandpoint police officers in an image captured by an officer’s body-camera in 2017.

Rhodes has made a name for himself in white nationalist circles for spearheading racist and anti-Semitic robocalls into communities around the country, in addition to hosting an offensive podcast. Rhodes’ most famous, or infamous, robocall campaign came in May 2018. The calls described U.S. Sen. Dianne Feinstein (D-CA) as a “traitorous Jew” and a “nation-wrecking Jew.” The calls encouraged people to vote for one of Feinstein’s opponent, neo-Nazi Patrick Little. Rhodes bragged that more 350,000 Californians received the anti-Semitic robocall, including many Jewish institutions.

Rhodes was an avid Little supporter. In a podcast, Rhodes praised Little for working to defeat “the evil, bloodsucking Jew, Dianne Feinstein,” and he joked about Little stuffing Feinstein into an oven. Little would go on to receive a little over 1% of the votes in the Primary Election; however, that came to just under 90,000 votes.

The white nationalist and anti-Semitic content of the robocalls is hardly surprising. Rhodes frequently employs similar offensive rhetoric on his “The Road to Power” podcast, which bills itself as a “video podcast for White Nationalists.” On it, he has encouraged fellow white nationalists to move to “very white, very racist North Idaho.” He also uses his program to advocate for a white takeover of America. Anti-Semitism is a huge piece of his podcasts. He has stated:

On his podcast, he has claimed African Americans have “such tiny brains” and are “incapable of logical thought.” On the same program, he stated they have “tiny monkey brains.” He’s also promoted the racist idea that a “Negro menace” and “Negro plague” are targeting white law enforcement, including that cops are being killed by “feral Negro animal[s].” He finished up that segment saying that, if you support law and order in society, “you have to be racist.”

Rhodes’ activism isn’t limited to social media and phone calls. In 2017, he handed out CDs containing white nationalist and anti-Semitic material in the parking lot of Sandpoint High School. In 2015, he circulated fliers that pictured the Sandpoint mayor in a Nazi gas chamber. Those daring to question Rhodes or call him out for his white nationalist activism frequently become the focus of hate-based flier campaigns. In the recent past, these targets have included Muslims, African Americans, journalists, and local human rights activists.