By Rachel Carroll Rivas and Travis McAdam of the Montana Human Rights Network &
Tobin Miller Shearer, director of African-American Studies at the University of Montana


Human rights and inclusive democracy. Stephen Bannon and white nationalism. There’s no doubt that there have been two very different points of conversation in Missoula this week, and they symbolize the current struggle over which values will define our communities.

Those of us supporting inclusive democracy look forward to Human Rights Day this month, with this year marking the 70th Anniversary of the United Nations adopting the Universal Declaration of Human Rights. The groundbreaking document proclaimed that all humans are entitled to inalienable rights grounded in universal values. Worldwide, people celebrate the progress made toward reaching the Declaration’s promises of justice and human dignity, while acknowledging the work to be done to make those rights a reality for all.

Stephen Bannon was supposed to speak in Missoula on December 11. Bannon has bragged about transforming Breitbart Media into the “platform for the alt-right,” thereby creating a vehicle to rebrand white nationalism for the social media era. Under his leadership, Breitbart pushed stories that mobilized the ugliest of human traits – racism, anti-Semitism, sexism, and bigotry. Bannon’s Breitbart guided white nationalism to the forefront of mainstream politics, which prompted Donald Trump to hire him to run a presidential campaign and serve in the White House. Bannon used his influence to implement white nationalist policy, including the religiously discriminatory Muslim Travel Bans. 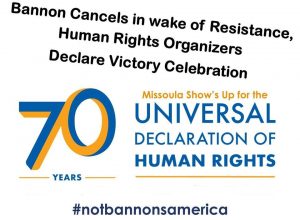 While the Universal Declaration provides a framework to unify and elevate the rights of everyone, Bannon pushes ideology dictating only a narrow few should have rights and control over their lives. However, this is bigger than Bannon. Bannon’s influence has waned since he was forced out of the White House and Breitbart. Now, he isn’t even going to show up in Missoula, knowing there was already a rally planned for human rights. So, why should we care? Because, this is about the ideas at stake when it comes to Human Rights Day vs. Bannon.

The threats posed by white nationalism existed before Bannon or his proposed visit to Montana. Too often people focus only on individuals. That misses the point that ideas, including white nationalism, have power and appeal. Powerful ideas transcend geography, economic status, and personality. Failing to recognize this causes us to blame an individual only and not address the dangerous ideas that tear us apart.

If we just remove one nasty leader, it will NOT all be better. The bigger problem is not the messenger. It is the message. Bannon and white nationalists peddle fear and hatred, but they don’t exist in a vacuum. Instead, they prey upon and amplify the everyday bigotry, institutionalized racism, and marginalization of certain groups. White nationalists amplify injustice and attacks on human dignity, precisely what the Universal Declaration seeks to correct.

White nationalism seeks to exploit very real anxieties that people hold. The problem is its solutions only involve fear-mongering and limiting who can be part of our communities. To address these anxieties, we should be talking about real solutions to economic challenges, codifying human rights principles, and creating a more inclusive democracy. The Universal Declaration provides a framework to do just that.

We encourage Missoula to celebrate Show Up for Human Rights Day with us on December 11. We’ll be coming together at 7:00 p.m. at the UC Ballroom on the UM Campus. White nationalists seek to divide us. Instead of embracing that fear and hatred, let’s come together to celebrate human rights!

Tobin Miller Shearer, an Associate Professor of History, is the director of African-American Studies at the University of Montana, the country’s third oldest such program.